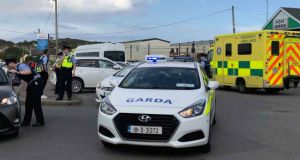 The shooting of Keith Branigan in Clogherhead, Co Louth, on Tuesday involved a team of killers that successfully escaped the scene. Photograph: Ciara Wilkinson

One of the main figures in the worsening Drogheda feud has now been linked to four murders, including the gunning down of Keith Branigan (29) in a Co Louth caravan park on Tuesday.

The killing of Branigan, a former plasterer and a violent criminal who had served time in prison, is the first fatality in the Drogheda feud. His killing near Clogherhead is also regarded as significant because it represents something of a power shift in the gang war.

Before Branigan was shot dead on the decking of a mobile home at the Ashling Caravan Park on the Termonfeckin to Clogherhead road at about 2.50pm on Tuesday, four men had been wounded in gun attacks in the feud. All of those attacks had been inflicted by the same gang on their rivals.

However, the murder of Branigan is the first time the gang that had been victimised in the earlier shootings has staged an attack of its own on its rivals. The fact it proved to be fatal will enrage the other faction as it felt it was in a dominant position, gardaí believe.

The gang that killed Branigan had for a long period been heavily influenced by two men, one in his 20s and other in his 30s, from Drogheda.

However, because of developments in the feud and the policing of it, those two men have not been in a position to exert the same influence of late. The specific reasons for their diminished role on that side of the feud at present cannot be outlined for legal reasons.

However, another criminal with a very long involvement in organised crime has stepped up to a leadership position of that faction, which has now shot dead Keith Branigan.

That leading criminal, who has grown more influential, was linked to three murders before the Drogheda feud erupted in July 2018.

He was linked with the gun murder of Benny Whitehouse (35) in Balbriggan in 2014, a drug dealer who was shot dead as he returned to his car after bringing his daughter into national school.

He has also been linked to the disappearance, presumed murder, of a couple in 2015.

Gardaí believe they were killed because the men who killed Whitehouse feared the couple was intent on supplying information to the Garda Síochána about the Whitehouse murder.

Garda sources say while much of the violence in the Drogheda feud has been characterised as chaotic, both sides have now carried out well-planned shootings.

The shooting of Branigan on Tuesday involved a team of killers that moved around in two stolen vehicles and successfully escaped the scene.

Branigan was a close associate of a Drogheda man in his mid-20s who is regarded as the key player on the side of the feud that carried out the four non-fatal shootings over the past year.

That central figure is under intense investigation by the Garda and detectives on the frontline of conducting inquiries into the feud-related violence – in excess of 70 incidents. They are confident they have significant evidence linking the gang leader to some of the crimes.

If that proves to be the case and he is charged and convicted, as gardaí believe will happen, that would take a key figure in the violence out of circulation.

While that man is a young criminal, he has proven adept at securing firearms and winning the following of a group of young drug dealers willing to commit serious offences at his behest.

The Drogheda feud effectively arises because his drug dealing faction of men, many of them in their early- to mid-20s, in Drogheda were challenging a more established drug-dealing group that killed Branigan on Tuesday.

The young gang leader is surrounded by a group of very close associates, most of whom he has known since childhood. Gardaí believe that, unlike veteran criminals, he has been personally involved in some of the feud attacks; a direct approach detectives believe will soon prove his undoing.

Branigan (29) was suspected of being a getaway driver for some of those crimes.

The faction that Branigan and the young gang leader have been involved in also counts among its ranks a man in his early 20s who has a history of extreme violence. He is suspected of being the gunman in at least one of the four non-fatal shootings and gardaí believe his propensity for violence will drive the feud further in the months ahead.

However, the real concern is that the older and more established side, which has seen its leadership on the ground change of late, will now continue with well-planned ambushes intent on killing its young rivals, as was the case with Keith Branigan this week.

While both sides of the feud are now under intense investigation, they have continued their involvement in the drugs trade and both have a reputation for extorting from drug users and street dealers sums of money far in excess of what is owed.