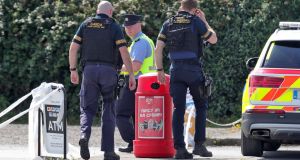 One of two cars used by the men who shot Keith Branigan dead in Co Louth on Tuesday was not burnt-out when abandoned, raising hopes that it will yield valuable forensic evidence.

Gardaí on Wednesday released more details about the Drogheda feud murder and moved to dismiss suggestions that it was a drive-by shooting but rather a daring ambush.

Sources said those who carried out the attack had set plans in place well in advance and also had detailed knowledge of the caravan park.

Branigan (29) was a well-known criminal and close associate of a leading figure on the side of the feud that has carried out four gun attacks over the past year in which the victims were wounded but not fatally. He was suspected of acting as getaway driver in at least one of those attacks. He had a history of involvement in serious assaults, burglaries and criminal damage cases in his teens before progressing to drug dealing as he got older.

Gardaí believe the rival gang knew he was spending time at the Ashling Caravan Park near Clogherhead and targeted him there on Tuesday as he was erecting decking on a newly installed mobile home.

The killer was driven into the caravan park in a red Lexus, registration 05 C 24473, before getting out of the car, firing at the victim and being driven away in the same car by at least one accomplice in the direction of Termonfeckin.

They then got into a black Toyota Avensis, registration 04 WH 8024, which was later found abandoned in the Clonmore Estate in Ardee.

While the Lexus had been burnt-out at Thurles Road in Dunleer, the Toyota Avensis was intact when it was found. The Toyota was due to undergo an extensive technical examination in the hope it might yield forensic evidence that may link suspects to the murder.

Supt Andrew Watters of Drogheda Garda station said of the murder: “It was a particularly indiscriminate and callous act carried out in a very busy caravan park. There were a lot of families, women with young children in particular, close to the area of the shooting.

“A number of stray shots caused damage to two cars in the vicinity of the car park.”

Asked what he had to say to members of the public who were fearful after the 13-month feud between drug gangs in Drogheda escalated, Supt Watters said an operation was in place to deal with serious organised crime.

“I would like to reassure the public of Drogheda and surrounding areas, we made a number of very significant detections, arrests, prosecutions and we have people before the courts on some very serious charges and strict bail conditions,” he said.

“I would like to reassure the public that that operation is ongoing. Indeed yesterday at the same time that this callous indiscriminate murder took place, we had four people detained in Drogheda Garda station for a serious arson attack which we classify as an attempted murder.”

He said he had received additional resources in Drogheda Garda station in the last two months and also has the support of regional units and the armed support units as well as national units.

“I would like to reassure the public that every effort is being made to protect the people of Drogheda through this operation.”

Cllr Pio Smith (Lab), who works in addiction services, said: “People in Drogheda are fed-up. They feel that while the guards are making great strides and efforts to make the community safer, the DPP is not giving answers as to why the gangland legislation is not being used. Everybody knows who is controlling both gangs but they are allowed to walk the streets.”