Teachers’ union to ballot for industrial action over two-tier pay 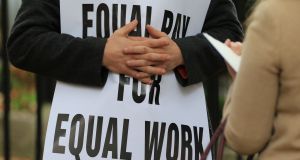 A placard from a teachers’ strike led by the ASTI in 2016. The TUI is to ballot members next month to renew its mandate for industrial action as tensions rise over controversial two-tier pay scales. Photograph: Nick Bradshaw

A teachers’ union is to ballot members next month to renew its mandate for industrial action as tensions rise over controversial two-tier pay scales .

The Teachers’ Union of Ireland (TUI) has announced it will ballot its 18,000 members for a mandate for industrial action, up to and including strike action, as part of its campaign to end pay discrimination.

The Irish National Teachers’ Organisation (INTO), meanwhile, has warned that primary teachers are losing patience as exploratory talks on pay review plans linger.

While much of the two-tier pay gap has been restored in recent years, teachers’ unions say a significant shortfall remains between teachers hired since 2011 and their longer-serving colleagues.

Last April, on the eve of teachers’ conferences, the Government pledged to give the two-tier pay issue “full consideration” either in a new pay review mechanism or in the context of the next round of pay talks. However, there is no clarity yet on the scope or timeline of any such review.

Under the terms of the current pay deal, thousands of new entrant teachers are set to benefit from pay restoration shortly which will see those hired since 2010 “jump” increments alongside a negotiated salary uplift of 1.75 per cent.

While the TUI acknowledged that progress has been made in the campaign to end pay discrimination, the union’s president Séamus Lahart said a gap still remains.

“The process must now be completed and this injustice conclusively addressed,” he said.

While the TUI voted in favour of the current pay deal last year, Mr Lahart said it was now moving to ballot members to “refresh”a mandate it received for industrial action in September 2017.

Mr Lahart said the biggest differences in pay between those employed before and after 1st January 2011 still occur in the early years of employment.

He said new entrants to second level teaching earn 14 per cent less on initial appointment and 10 per cent less in the first 10 years than they would have before the introduction of cutbacks.

“This two-tier pay regime is a cynical, damaging, discrimination, resulting in situations where colleagues are paid at different rates for carrying out the same work,” he said,

“It must also be borne in mind that many new entrants to teaching do not secure a contract of full hours upon initial appointment, earning just a fraction of the whole-time salary. In addition, they are commencing their career at an average age of 26.”

He said the union was not looking for preferential treatment for these teachers but was simply looking for “all teachers to be treated equally”.

INTO general secretary John Boyle said its members have shown “tremendous patience” in recent months taking in good faith the commitments made by the Department of Public Expenditure and Minister for Education Joe McHugh.

“Members will be frustrated that they return to school this year without clarity on the nature of the proposed review, which would lay a clear pathway towards pay equalisation in the forthcoming pay talks,” he said.

“While our campaign has led to significant progress towards pay equality for many new entrants this year, our members are steadfast in their determination and unified behind our goal of finishing the job to secure full, upward pay equality for all those that entered the teaching profession between 2011 and 2014 and securing the school leaders’ award.”

He said he urged the Government to show the political leadership to “get this pay review up and running immediately”.