Man who propelled partner down stairs gets 16 years for murder 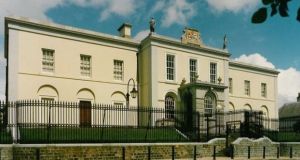 Downpatrick Crown Court heard that although Michael O’Connor must have been aware of his partner’s injuries, he took a bus to Belfast with the couple’s five-year-old son, essentially leaving Joleen Corr to die.

A man who “propelled” his partner down stairs, leaving her with permanent and severe brain damage which ended her life, was on Thursday told he will spend at least 16 years of his life sentence in jail before he is considered for release.

Judge Geoffrey Miller QC told the “physical and psychological” bully he would serve at least 16 years behind bars for the murder of Joleen Corr (27) and would be released only under a life-long licence when the Parole Commissioners considered it safe to do so.

The judge described Joleen as a “bubbly young woman” whose life was “cruelly cut short” by the actions of O’Connor when he punched her in the face with such ferocity that he broke her jaw, “propelling her down the stairs” at her home in Thomas Russell Park in Downpatrick.

“As a direct result she sustained catastrophic brain injuries from which she never recovered,” said the judge. He said her plight was not discovered until the following morning when O’Connor asked a neighbour to check on her, issuing the “shameful” lie that she had tried to kill herself the night before.

“By then there was no prospect of any form of meaningful recovery,” said Judge Miller. He told the court the 16 months until her life support was turned off and she sadly passed way, “was a traumatic time for Joleen’s family”.

O’Connor claimed that he and Joleen had been fighting over her mobile phone at the top of the stairs on December 1st, 2016 when he lashed out and knocked her down the stairs. He further claimed he had gone to bed and in the morning, found Joleen “snoring” beside him.

The court heard that although he must have been aware of her injuries he had a bath and took a bus to Belfast with the couple’s five-year-old son where he had a haircut, essentially leaving Joleen to die.

She had sustained a brain injury so severe that doctors initially opted not to treat her and she died in 2018 when doctors withdrew life support.

Sentencing O’Connor, Judge Miller said his actions that night “has to be seen in the context of a man who used violence, both physical and psychological, as a means of control” and was the culmination of continual domestic violence perpetrated against Joleen.

“One shudders to think what that little boy witnessed or heard,” said the judge, adding had O’Connor not confessed, he would have been handed a 19-year minimum term.