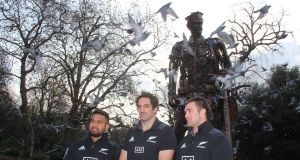 No country was further away from the fighting in the first World War than New Zealand, yet few were so disproportionately affected.

In many sites across the battlefields of Gallipoli and the Western Front, you will find the familiar New Zealand fern with the slogan “from the ends of the Earth”.

Out of a population of just a million in 1914, nearly 17,000 New Zealanders were killed fighting for king and country in a conflict which ostensibly had nothing to do with them.

Among them was the very first All Blacks captain, Dave Gallaher, who was born in Ramelton, Co Donegal, in 1873.

He volunteered to serve at the front and was killed during the last phase of the Battle of Passchendaele in October 1917.

Thirteen former All Blacks were killed in the war along with nine Irish internationals including Jasper Brett, who having survived the Somme, came home in 1917 and shot himself.

This monumental installation, made from scrap metal by artist Martin Galbavy, and on loan to Dublin until next weekend, is meant to convey the horror of war through the face of a haunted returning Tommy.

AIG, one of the sponsors of the installation, is also a sponsor of the New Zealand team.

The players got a talk from historian Mark Duncan about St Stephen’s Green’s complicated part in Irish history starting with the Fusiliers ’Arch (also known as Traitors’ Gate), the memorial to the Royal Dublin Fusiliers who died in the Second Boer War.

The players were also told of the green’s role in the Easter Rising and the disastrous decision of the Irish Citizen Army to dig trenches which left them overlooked by the British. Finally they visited the statue of Tom Kettle, an Irish nationalist, who was killed during the first World War.

New Zealand secondrow Sam Whitelock measures 6ft 8ins in his stocking feet, but even he was dwarfed by the six metres (20 foot high) Haunting Soldier.

The clash between the world champions and the Grand Slam winners , the two topped ranked teams in the world, is one of the most anticipated rugby matches in Dublin for years, but, as Whitelock (30) bluntly put it, it’s still only a game.

“I’m just a little bit older than they were when they passed away [soldiers at the front],” he said.

“ It’s always good to step back and be appreciative of the way we live our lives now, and the challenges that people faced 100 years ago are a lot different to the challenges we face now.

“New Zealand was not a big place then and it isn’t now. It’s only a game and we can’t get caught up in it. Obviously we want to go out and do well, but this brings us back down to earth fairly quickly. It’s always good to hear about these different experiences. It is very moving.”