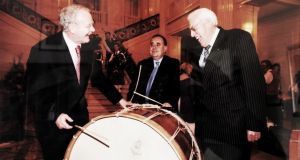 It was 2007 and the fledgling power-sharing administration in Northern Ireland was looking for support and legitimacy. During successive choreographed phone calls from the Rev Ian Paisley and Martin McGuinness, first and deputy first minister of Northern Ireland, I was invited to address the Stormont Assembly.

I came and delivered an address in the Senate Chamber that was finely tuned to upset as few apple carts as possible. But what I saw was nothing less than amazing. It turned out that the press reports of a rapport between the first minister and his deputy were underestimated. In private, the relationship between Paisley and the younger man was already deeply personal, even avuncular.

In the evening, in the great halls of Stormont, there was a carefully balanced melody of Irish and Scots Irish traditional music, boasting both pipers and flautists. And there amid the flute band there was a Lambeg Drum, a very symbol of the Protestant supremacy in Northern Ireland.

All day I had been looking for a photo to encapsulate progress in an atmosphere where handshakes were still problematic. Pictures, like phrases, make history in Ireland. I turned to Martin McGuinness and said: “You wouldn’t usually be so close to one of these drums?”

“Ah,” I said. “It would be something if you and Ian were to beat it together, would it not?”

Five minutes later, after a hastily summoned confab, the deed was done: Paisley and McGuinness with a drumstick each, and me behind the drum. It was in the days before pictures went viral. Nowadays, it would have been a certainty.

I thought of that photograph yesterday when news came through of Martin McGuinness’s passing, and the reaction to it.

In the responses to his death, some were caught in the hurt of the past but some were managing to overcome it. It is impossible to criticise those who lost so much through the violence of which McGuinness was part. But, significantly, some of those who lost the most were among the most generous in their tributes.

Ian Paisley jnr’s phrase yesterday that “we are not judged by where we begin but by where we end up” has a Presbyterian ring to it, but it is a truth that I firmly and intimately recognise.

The reality is that there would have been violence in Northern Ireland with or without a McGuinness, but peace only with him.

He was warm, engaging and witty and, as a hard man, uniquely placed to find the path to peace.

A deeply religious person, Martin (like Dr Paisley) used to end phone conversations with the words “God bless” – and he meant it. He would be more than aware of the respective ultimate fates of the peacemaker compared with those who wreak division in their own house. He found in Paisley not just a coalition but a soulmate.

Both are now gone and so, from politics, are a generation of Westminster leaders who understood at first hand the heavy penalty that is visited on all of us from neglect of Northern Ireland. The current prime minister seems totally oblivious of her responsibilities, and her relationship with all of the devolved administrations is, at best, distant.

The post-election talks are stalemated and the omens are not good. The Brexit event is casting its long shadow, like a nuclear winter, over politics. We have to hope that the parties of the North realise that real progress can only come from within.

They should follow the example of Paisley and McGuinness and beat the Lambeg Drum; beat it loud, but together.