Alcock and Brown returning to landing spot in west of Ireland 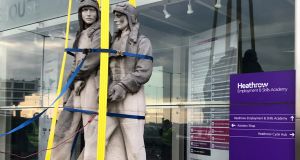 Up and away: the Alcock and Brown statue at Heathrow airport is prepared for its Co Galway visit. The pioneering aviators landed their biplane south of Clifden on June 14th, 1919, after flying from Canada

The two men who made aviation history by becoming the first to fly non-stop across the Atlantic are on the move again and returning to the landing spot in the west of Ireland where their plane touched down almost exactly 100 ago.

A statue of John Alcock and Arthur Brown is leaving its home in Heathrow airport and heading west on Tuesday morning. When it arrives in Clifden, Co Galway, on Thursday it will play a central role in celebrations marking the centenary of the first non-stop transatlantic crossing.

The two aviators from Manchester set off from St John’s in Newfoundland on June 14th, 1919, in a Vickers-designed biplane. They flew through thick fog, heavy snow and driving rain in an open cockpit with no means to keep warm or communicate, either with each other or the outside world, for the duration of their flight.

Just under 16 hours after they left Canada they caught a glimpse of the Aran Islands and made for the rugged Connemara coast nearby. They saw what they thought was a smooth green field and decided to land.

But what looked smooth and green from the sky was the sodden bog of Derrygimleigh 7km south of Clifden and while the landing was perfect, the plane quickly sank into the ground.

The pair made their way to the nearby Marconi Wireless Station and eventually on to London where they were greeted as heroes and knighted by King George V within the week.

In the 1950s, a statue of the men was commissioned by the British government and placed in Heathrow. It has been moved around the airport complex five times since it found its first home, and is on the move again this week.

Brian Hughes of the Abbeyglen Castle Hotel in Clifden was one of the main players in bringing Alcock and Brown back to the west.

“It has been almost two years in the planning,” he said. “You know how difficult it is to get through Heathrow as a passenger, so just imagine how hard it has been to get a 13-ft high, 4-ft-wide statue 1 tonne statue through it.”

Alcock and Brown will be travelling in “a specially-made casket – I call it a coffin – by road and boat with their journey taking around 48 hours”, he said.

Initially the plan was for the statue to sit in the centre of the town but difficulties getting insurance meant Hughes had to agree to station it in the grounds of the hotel where it will be monitored by CCTV cameras.

“They will be here for four weeks before the centenary and for four weeks after it,” he said. “It is really important for us because of the impact that first flight had on the world and we really value the part Clifden had to play in that.”

The celebrations – which will include the Central Bank commissioning a coin, An Post releasing a stamp and the Air Corp re-enacting the landing – will be “the talk of the town”.

Hughes said the organising committee had considered commissioning its own statue “but to be honest I think this is better, because we are bringing the two men back. It’s a reunification of sorts.”