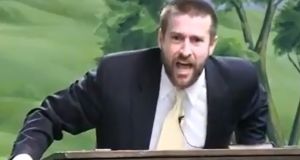 Online petitions have been launched calling on the Government to ban fundamentalist American preacher Pastor Steven Anderson from speaking in Dublin on May 26th next.

According to Changing Attitude Ireland, a liberal Church of Ireland group sympathetic to gay people, Mr Anderson “has advocated exterminating LGBT+ people, lauded the massacre in the Florida Gay Night Club of LGBT patrons and said he prayed nightly that US president Barack Obama would die!” He is also a Holocaust denier.

On April 5th last, launching a petition opposing the preacher’s plan to speak in Dublin this month, it said “the notorious anti-gay Pastor” wanted “to come to Ireland, on an invitation from Northern Irish Baptist Preacher Stuart Houston to evangelise Dublin on May 26th.”

It invited people to sign a Change.org petition requesting that the Irish Government ban Pastor Stevenson from speaking in Dublin. As of lunchtime Monday 11,532 had done so.

Separately, the global LGBT+ rights organisation All Out has teamed up with LGBT Ireland and Gay Community News (GCN) magazine to organise the petition targeting Minister for Justice and Equality Charlie Flanagan.

It calls on him to “stop Steven Anderson from promoting his hate-mongering in Ireland by denying him entry to the country.” It continued “he plans to come to Dublin to spread hate against LGBT+ people. Hate has no place in Ireland.”

The group also plans to stage a protest in Dublin against Pastor Anderson’s planned visit closer to May 26th.

Last Wednesday the Government of the Netherlands banned Pastor Anderson from entering that country where he was to speak on May 23rd next. It followed calls from MPs and LGBT+ activists there.

Dutch secretary of state for justice Mark Habers said the ban was part of their policy of “taking strong action against extremist speakers who, by spreading their beliefs, restrict the freedoms of others or even incite hatred or violence.”

As well as the Netherlands Pastor Anderson has also been refused entry to all other 26 EU member countries of the Schengen Area which does not include Ireland or the UK.

However he was banned from the UK in 2016 when a government spokesman said “the Home Secretary has the power to exclude an individual if she considers that his or her presence in the UK is not conducive to the public good or if their exclusion is justified on public policy grounds . . . Coming here is a privilege that we refuse to extend to those who seek to subvert our shared values.”

Pastor Anderson (38), whose church is not affiliated to any Christian denomination, is based at Tempe in Arizona. According to his Faithful Word Baptist Church website he began the Church on December 25th, 2005.

It says “he holds no college degree but has well over 140 chapters of the (King James) Bible memorised word-for-word, including approximately half of the New Testament.”

A Department of Justice spokesman said: “The Department does not comment on individual cases. When a person from a non-visa required state presents at immigration, a decision to grant entry is made by an immigration officer and is subject to the entry requirements of the Immigration Act 2004.”