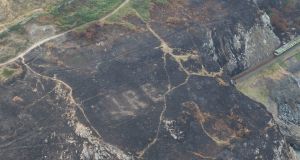 Recent gorse fires at Bray Head have exposed a Second World War era Éire sign that had been covered up for more than 70 years. 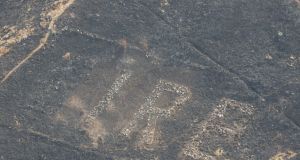 Recent gorse fires at Bray Head have exposed a Second World War era Éire sign that had been covered up for more than 70 years.

The Éire signs were carved into the ground by volunteers from the local Look Out Post (LOPs) during the Second World War to warn German and Allied airmen that they were passing over a neutral country.

Each was given a number. The number at Bray Head is eight and the number can be faintly seen beside the ÉIRE sign.

It is estimated there are 85 such signs extant around the coast of Ireland.

The tweet stated: “A GASU crew spotted that the fire on Bray Head has revealed an “ÉIRE” sign dating from the Second World War. We see these around the coastline but haven’t seen this before.”

Irish Air Corps spokesman Mick Barcoe said crews have been supporting firefighters for the last three weeks on Bray Head, but the sign was only visible after the smoke cleared.

During the Second World War the Éire signs were made from stones which were then whitewashed.

The sign at Bray Head disappeared under a canopy of gorse, but the fierce fires of recent weeks caused by the hot weather burned away the vegetation around it.

Mr Barcoe said he had hoped from a personal view that the OPW takes charge of the sign and restore it to the state it was in during the war.

Volunteers on Inishmore in the Aran Islands recently restored its Éire sign.