Air ambulance service ‘on the brink of collapse’ 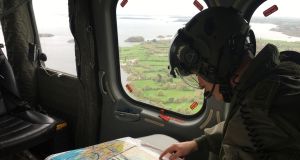 The air ambulance service operated by the Defence Forces is “on the brink of collapse” due to staffing levels, military officers have been told.

The Emergency Aeromedical Service (EAS), which has operated out of Custume Barracks in Athlone since 2013, has been one of the areas hit hardest by the recruitment and retention crisis affecting the Defence Forces.

The situation is so bad that a Lieutenant Colonel frequently has to fly missions due to a shortage of pilots at the rank of Captain, delegates at the Representative Association of Commissioned Officers (Raco) biennial conference heard.

Raco’s General Secretary Commandant Conor King told delegates, as well as Defence Forces Chief of Staff Vice-Admiral Mark Mellett and Minister of State for Defence Paul Kehoe, that the EAS has saved “countless lives”since 2013 but is now “on the brink of collapse”.

The high numbers of pilots leaving the Air Corps for the private sector means senior officers regularly have to fly aircraft instead of carrying out management roles, he said. Furthermore, under the current pay structures these senior officers are not eligible for flight allowances which are available to more junior pilots despite having to fly in an “arduous high-risk environment”.

The EAS, which comprises a single helicopter, is run by the Air Corps in cooperation with the National Ambulance Service and the HSE. It is deployed in critical cases where patients might not survive an ambulance journey. Last year the EAS flew 320 missions amounting to a total of 581 hours flight time. This is down from 2017 when it flew 599 hours, and significantly down on 2016 when it flew 848 hours.

Most of the missions in 2018 related to trauma events involving physical injuries such as car crashes (159), while 146 related to other medical emergencies.

Fifteen of the missions involved ferrying children to hospitals for emergency care.

A lieutenant colonel with the EAS described how he flew a mission from Athlone on Monday “with a low cloud base and heavy rain” in response to a heart attack case in Co Wicklow. He then flew another patient to Tallaght Hospital in “extremely poor weather” following a domestic accident.

During that time, he was responsible for a €13 million aircraft as well the lives of the crew and the patient, he said. “This responsibility is onerous. But as a senior officer I receive no duty allowance for this although my co-pilot and EMT (Emergency Medical Technician) rightly did.”

He added: “Senior officers should not be conducting such duties. I should be back at my unit managing risks and looking after my personnel.”

The reason he has to fly missions is because of the “hollowing out”of more junior ranks, the officer said.

“We rely on colonels and lieutenant colonels to do the jobs of our captains.”

At the conference in Kildare, Raco delegates voted unanimously to accept a motion recommending senior officers receive the same duty allowances are their junior colleagues when carrying out such missions.