Advertising watchdog will not review ban of controversial tampon ad

ASAI received 150 complaints, some of which said ad contained sexual innuendo and was ‘offensive’ 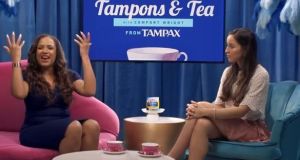 A screengrab from the banned ‘Tampons and Tea’ ad.

The Advertising Standards Authority of Ireland (ASAI) has said it will not carry out a review of its controversial decision to uphold complaints from members of the public about a TV ad for tampons after the company behind the brand opted to accept the ruling.

At the end of last month, the ASAI caused huge controversy at home and internationally after it banned a “Tampons and Tea” ad, which featured a light-hearted discussion in a TV studio setting on how to use tampons.

In reaching its decision, the watchdog said the commercial had caused widespread offence based on the relatively high number of complaints made about it.

It said it had received 150 complaints about the advert, including claims that it was offensive, demeaning to women, unsuitable for children, and contained sexual innuendo.

Several complainants took issue with the language used in the advert, including the phrases “you gotta get ‘em up there girls” and “not just the tip, up to the grip”, which they claimed was vulgar, embarrassing, and crude.

Some said they found the language used to be “over-descriptive, inappropriately expressed and with excessive detail”, the ASAI said.

Others said the ad was demeaning and belittled women by implying they might be ignorant on how to correctly use tampons.

Still more said it had the potential to cause embarrassment to young girls, who might be watching it with their father, brothers or male friends.

One parent wrote to the ASAI to complain that their two teenage daughters had been “mortified” while watching the advert.

Under the ASAI code, parties to a decision have 21 days to seek a review of with advertisers required to pay a fee of €5,000 for such an application. The fee for a general complainant seeking a review is €30.

A review panel can then decide to refer the issue back to the ASAI’s complaints committee for reconsideration.

In a statement on Tuesday, the ASAI said Procter & Gamble had informed it “that they have chosen not to seek a review of the decision made by the Complaints Committee, the body responsible for complaint adjudication and which acts independently of the ASAI Board and the ASAI Executive.”

As a result, “the decision remains that the ad should not run in the same format again.”

It said advertising found to be in breach of the code can be published again “if it is amended to bring it into compliance with the code.

The ASAI Executive is always available to work with and assist advertisers in attempting to bring an advertisement into compliance with the code.”

The statement acknowledged that there had been “a lot of commentary on the ruling” and said it wanted to “reiterate that the ASAI fully supports the advertising of all product sectors, including tampons and other sanitary products, in any media or on any platform.”

It said “awareness, education and informational ads are all totally acceptable as long as they are compliant with the code. Each ad is judged on its own particular merits, taking account of the content and the context.”