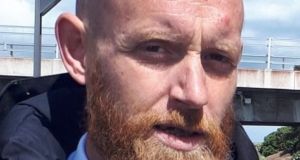 Gardaí have ruled out foul play in the death of a 35-year-old homeless man whose body was found with a head injury near the entrance to a city centre car park in Cork last week.

Officers had been keeping an open mind in relation to the death of Gary Dineen after his body was found near the entrance to Merchant’s Quay Car Park on Parnell Place in Cork on August 12th.

A postmortem by Assistant State Pathologist Dr Margaret Bolster had confirmed Mr Dineen suffered serious trauma to the head but gardaí continued to investigate how he sustained the injury.

Gardaí believed that Mr Dineen may have been dead and his body lying on Merchant Street, a cul-de-sac near the entrance to the car park, for several days before his remains were found on August 12th.

They began examining CCTV footage from the area and have established that Mr Dineen entered the Merchant Quay Car Park on his own at about 8pm on the evening of August 8th.

And they believed he sustained his fatal head injury when he fell from one of the floors of the car park on to Merchant Street below where his body was found four days later.

Gardaí investigating Mr Dineen’s death will now prepare a file, including the results of the postmortem, on the tragedy for an inquest at the Cork City Coroner’s Court to be held later in the year.

A native of Alexandra Place in St Luke’s in Cork, Mr Dineen is survived by his father, Don, his sister Kathryn and his young sons, Jake and Issac, and he will be buried following a private family funeral.

Mr Dineen, who had battled addiction issues, had been homeless and living on the streets for about 12 years and he was fondly remembered by those working with the homeless in Cork.

Caitriona Twomey of Cork Penny Dinners said that Mr Dineen was a familiar figure, calling to their centre on Little Hanover Street off Sheares Street to avail of hot meals on a daily basis.

“Gary would have come every day for his dinner and we used to see him at night too around the streets – he had his demons like everybody else but he wasn’t any bother,” said Ms Twomey.

“He was very interested in music and he made some stuff and he would show us that and we would listen to it on his phone.

“He was very proud of his music and he always wanted to make a career of that – that would be the one thing we would talk about – he had a dream that he could make this come true.”