Advertising of e-cigarettes to be restricted, Harris says 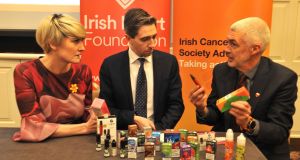 Advertising of e-cigarettes is to be restricted in order to limit the exposure of young people to them, Minister for Health Simon Harris has confirmed.

Provision allowing for the banning of e-cigarette advertising near schools and creches, and on public transport, will be added to legislation planned for next year that will introduce a ban on sales of the products to under-18s, he said.

Mr Harris was speaking at the launch of focus group research on flavoured e-cigarettes by the Irish Heart Foundation (IHF) and Irish Cancer Society, who allege these products are being marketed at teenagers by vaping companies.

The two groups say e-cigarette companies are not telling the truth when they claim sweet flavours such as candyfloss and bubblegum are aimed at adults rather than children.

The third- and fourth-year students who participated in focus groups for the research rejected the idea that e-cigarette companies do not design their advertising and packaging to attract children.

The two health charities want restrictions on advertising and on flavoured products to be including in the upcoming legislation banning sales of e-cigarettes to under-18s.

Mr Harris said he would look at the issue but warned there may be legal obstacles as well as issues around the definition of a flavoured product.

But he said he was sure the reason the industry relied on flavoured products, often produced in colourful packaging, was to make their products attractive to children.

Describing the matter as a major public health issue, he said tobacco companies, which now market many vaping products, were trying to “replenish” their customer base by “hooking” a new generation of Irish people to their products.

Vape Business Ireland, which supports a ban on sales to under-18s, said it does not support a ban on flavours as they play an important role for adult smokers looking for an alternative product.

“It is our view that vaping products are a product of choice for adults and should never be sold to those under 18. Therefore, marketing and advertising of vaping products should be socially responsible and directly only at adults,” said spokesman Joe Dunne.

In the research, young people in four mini focus groups were asked to comment on e-cigarette packaging and flavours shown to them. Categorising the products into four types of flavouring, they said only one, associated with existing tobacco products, could be expect to appeal to current smokers or those looking to quit. The other three were linked to food, fruits and sweets, and were considered to be appeal to young people as they were often found in the foods and drinks that appeal to them.

“The fact that the only purpose of flavours like strawberry milkshake, cherry crush, chocolate mint and caramel is to lure a whole new generation of children into nicotine addiction has been endorsed resoundingly by the teenagers who took part in this research,” said Tim Collins, chief executive of the IHF.

The children also highlighted the prominence of vaping on social media, at times promoted by influencers.