Hines claims new regulations could add €11,000 to construction cost of each flat 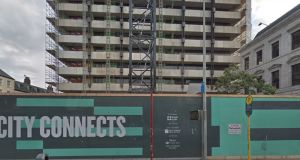 Hines is behind the redevelopment of the former Central Bank building on Dame Street. Image: Google Street View

A major property developer has lobbied against the introduction of new fire-safety standards, arguing they are “over(ly) onerous” and will “have a negative impact on the financial viability” of apartment construction.

The builder, US company Hines, also told the Government that the new regulations would be “less safe”, result in fewer apartments being built and add up to €11,000 to the cost of each apartment.

The company is building about 4,500 apartments in Dublin, and is behind several high-profile property plays in the capital, including the redevelopment of the former Central Bank building on Dame Street.

The arguments were made in a submission to a Department of Housing consultation on the new rules, which will apply to open-plan apartments. The department has said these designs are “becoming increasingly popular” but that current fire-safety guidelines “do not provide specific guidance on them”.

The submission, which was released under the Freedom of Information Act, is focused on three proposed amendments to the fire-safety sections of the building regulations.

One section of the proposed reforms stipulates a minimum distance of three metres between cooking hobs and escape routes. The department has said this “will provide a resilient standard of safety”.

Mel Reynolds, an architect and housing expert, told The Irish Times that “appropriately, the authorities are erring on the side of caution here, which is a correct approach from a safety perspective”. Mr Reynolds said the revised regulations “should be welcomed”.

However, in its submission Hines argued there was “no justification” for the mandatory distance which would “result in larger and more expensive apartments”. It argued that an expert report it commissioned – which it says was accepted by Dublin Fire Brigade – found a more appropriate distance would be 1.5 metres. A second source, who also made a submission during the process, agreed that the Hines suggestion of a 1.5m separation could be sufficient.

Hines also argued that its open-plan apartment designs, which rely on sprinkler systems, were in fact more safe than those being suggested by the department. It said there was no need for bedrooms to be enclosed in fire resistant materials, citing expert advice it commissioned which said the requirement “will significantly increase costs and complicate ventilation”.

Its expert analysis “concluded the risk to life was significantly reduced with the sprinklered open plan compared to the conventional apartment design”.

The new regulations, it said, “will also drive developers away from fully sprinklered apartments back to traditional layouts with no sprinklers, resulting in less safe apartments. Additional time will be required in the construction programme to allow for inspection of fire stopping at bedrooms before closing up walls”.

Hines also argued that a requirement for a firefighting lobby “seems over(ly) onerous”, “is at odds with current practice” and “will require additional space and increase construction costs”. A firefighting lobby is an enclosure designed to act as a staging post when fire crews are battling a blaze. The department has said the introduction of lobbies would “ensure the safety of persons evacuating the building” and “provide suitable facilities for firefighters”.

In a statement, Hines said that safety is “a number one priority”.

“As a responsible developer, Hines is both a relevant and appropriate stakeholder with global perspective, experience and expertise, and it is entirely appropriate that it might make a constructive and informed contribution to this process.”

The company, which told the department that the revised rules could add costs of between € 9,000 and € 11,000 per apartment, said it was fully compliant with all statutory planning and safety regulations and codes and was “appropriately certified to that end”.

“The ultimate arbiter in respect of any new fire regulations will be the Minister and the department based on the totality of submissions received, and its own expertise and research.”