A smart tent that’s housing the homeless in India

A smart, weather-resistant tent designed by billionBricks can shelter a family of five 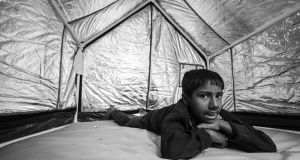 For six years, a married homeless couple were separated, forced to live apart in Delhi, India. The husband was in one gender-segregated communal shelter and the wife in another. Last year, for the first time, they were able to move into their own “home”.

Their new “home” is a tent, designed by Singapore-based non-profit organisation billionBricks. The tent can be set up by one person in 15 minutes without any tools. It is weather-resistant, offering protection from the city’s extreme temperatures which can range from five to 45 degrees. It can fit a family of two adults and three children. The couple even moved in a bed, explains billionBricks’ founder, Prasoon Kumar.

More than 20 homeless families pilot-tested the tent in Delhi and Mumbai in India. The United Nations estimated that there were 100 million people homeless in 2005, the last time a global survey was done.

The weatherHYDE tent – designed by a studio in Singapore – is weatherproof. In the winter, its triple-layer reversible cover provides insulation, while reflective material on the inside traps body heat. In the summer, the tent cover can be reversed to reflect solar heat, helping people inside stay cool.

Priscilla Goy’s article was written for the Straits Times, Singapore