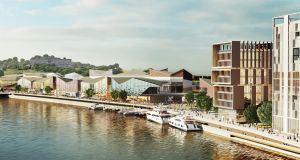 There’s not much to see yet on Waterford’s North Quays, the site of a proposed €350 million regeneration project which got its first commitment of Government funding this week.

Access to the 17-acre waterfront site is blocked by gates at both ends. Piles of rubble lie where the brutalist, Hennebique flour mill was demolished earlier this year, to begin making way for the development of 60,000sq m of retail units, leisure and office space, 200 apartments and a relocated train station.

Along the strip of small shops and businesses across the road on Fountain Street, the reaction to the news of the first €6 million of public money to be committed to the plan was muted. The funding will go towards the construction of a pedestrian bridge linking the South Quays, and surrounding commercial area, to the new development on the North Quays.

The council has been “talking about regenerating the North Quays as long as my mother has been in business. It’s hard to know if it will ever happen,” says Paul Walsh of Walsh’s Lotto Shop.

A few doors along, in Aphrodite Beauty, Tara Dee says “the footbridge going ahead is good news.” But, she wonders where the customers for the 37,000sq m of retail space are going to come from.

The developer of the North Quays project, Falcon Real Estate, which is part of the Saudi Fawaz Alhokair Group, says the answer lies in the site’s accessibility to the wider southeast region, the 11,000sq m of office space included in the plan and the 2,300 direct jobs it says will be created. The plan also includes a park and visitor centre.

A total of €140 million will need to be raised over the next four years for infrastructure costs, of which €104.5 million is being sought from the Government. Some will come from the National Transport Authority and potential European funding sources are being looked at. Matching funding of €34.8m will come from Waterford and Kilkenny County Councils and Falcon’s investment of €350 million includes €9 million towards infrastructure.

“What we need to see now is a degree of certainty [on funding],” says Michael Walsh, chief executive of Waterford City and County Council (WCCC). For the first phase, WCCC had asked for €20.1 million from the Urban Regeneration and Development Fund. It received €6 million – less than it wanted, but still making it the largest single beneficiary of the fund.

Waterford Chamber of Commerce chief executive Gerald Hurley says it had been assured of the Government’s and the developer’s commitment. Now it is “awaiting a response from the Department of Housing to see what funding is available and what the timelines for the allocation will be”.

David Ennis of Ennis Gough Auctioneers says the footbridge will have a huge positive impact on traffic management and accessibility to the city for people living in Ferrybank. But he is concerned about where the 1,200 construction workers will live, and the scale and viability of the retail plan. He points to a nearby development, in which just one retail unit out of 10 is occupied.

“It seems to be a bit of a Kevin Costner mentality – build it and they will come. Where are the retailers who are going to fill this space? We’re in a scenario where we have retailers leaving the city centre.”

What the plan entails

But the urban regeneration plan is not just about creating a new Dundrum or Kildare Village on the long-neglected North Quays, says Walsh, although the city “has a real deficit in retail provision”.

The plan includes the provision of a “European-standard integrated transport hub”, to replace Plunkett railway station, which suffers from accessibility and space problems. Between five and 10 years down the line, there is a proposal for a new traffic bridge, extending from the Tower Hotel across the river Suir.

In the immediate term, the regeneration project includes a separate shopping development at Michael Street in the city. Suggestions of a light rail connection between the two are no longer being discussed; the plan being looked at now is for a driverless bus running from the Apple Market to the North Quays.

Supporters of the regeneration project say it will unlock other developments, including the €100 million redevelopment of the derelict Ard Rí Hotel, which was bought last year by Séamus Walsh, owner of Waterford Castle.

Reaction from the retail sector

Back in the city centre, retailers are reluctant to be perceived as talking down the development. Some privately express concerns about how the project will affect the city, where – if the number of empty units is an indication – the recession’s shadow is long.

But Michael Walsh says he believes the development will benefit the city as a whole. “From our point of view, our footfall is only half of what it should be at the moment,” he says. “Expanding the offer is the key and making Waterford more attractive for the region and visitors. The alternative is a downward spiral for retail. We would see this as being the catalyst to really significantly increase footfall and visitor numbers.”

Ultimately, the vision for Waterford is to preserve the historical city centre of small streets on one side of the river and create a more modern quarter on the other, providing access from Kilkenny, he says. This is in line with Ireland 2040 plans to grow the city to a population of 83,000.

“It’s about trying to create a new face for a part of the city which has been derelict and dragging down the city for far too long. The city centre is off-centre at the moment. And we need development to happen on the north side to make the entire city viable.”