Hundreds of dwellings to come on market in south Dublin 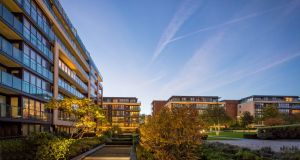 The acquisition of 274 units and a four acre development site at the Grange in Sandyford has been completed.

Hundreds of residential housing units are to come on the market in south Dublin following the acquisition of a €161 million site from Nama by a joint venture involving property company Kennedy Wilson.

Kennedy Wilson and AXA Investment Managers - Real Assets, acting on behalf of clients, said they had completed the acquisition of 274 units and a four acre development site at the Grange in Stillorgan, south Dublin.

The 274 units are 95 per cent occupied, but the group said it would “substantially grow” the unit count across the site to meet the “strong demand” in the area.

The joint venture described the area as “a prime employment hub with great connections to public transport in and around Dublin”. The four acre site is expected to accommodate an additional 263 apartments.

The development is subject to planning permission, which is expected to be submitted early next year. Construction is expected to begin soon after with new units and the resident amenities to be delivered in 2021.

The original 11.3-acre site at the Grange was bought by Ray Grehan’s Glenkerrin Homes for about €85 million in 2004. Grehan built and sold 323 apartments before the property crash.

The units are a part of the joint venture, which now has more than 1,850 existing units with the potential to add in more than another 1,000 in currently owned future development sites.

“We aim to fulfil the market’s demand for professionally managed, prime units with first-rate amenities, delivering strong net operating income growth through our asset management plans across the existing units and our ambitious development plans on the adjoining site,” he said.

“The joint venture portfolio has grown almost 60 per cent by existing unit numbers, since completion just under four months ago, with a promising pipeline of developments and further acquisition opportunities.”

“We remain confident in our ability to deliver a pipeline of top quality private rented sector projects with appealing local amenities, good public transport and the potential to deliver great homes for residents,” he said.

Divorce: What will it cost and can you afford it? 05:38
ComReg criticised for ignoring request to update pricing models 05:27
Pmask coverings likely to suit meat plant workers, founder says 05:26
Apple received $250bn dividend from Irish subsidiary in 2019 05:15
‘Humble’ Airbnb going back to basics 05:12