Sites in Cork and Dublin capable of delivering over 265 homes, company says 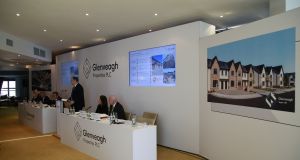 Glenveagh’s business is weighted toward providing starter homes, 70 per cent of which are due to cost below €350,000. Photograph: Nick Bradshaw/The Irish Times

Listed housebuilder Glenveagh Properties acquired two sites for a combined cost of €20 million which can deliver over 265 properties, it said on Tuesday.

The company, with a dual listing in Dublin and London, completed two infill acquisitions, it said, meaning its landbank now has capacity for over 11,600 homes.

Glenveagh’s Cork acquisition is in Eden, near the city, but it wouldn’t disclose where its Dublin site is. The company also declined to name the sellers of the land.

Over 80 per cent of Glenveagh’s landbank is in the greater Dublin area, with over half in the capital. The company intends to complete 250 residential sales this year and has 800 homes under construction across 14 sites.

The housebuilder raised €213 million in August and noted in an investor presentation that there’s “strong visibility on deployment” of the remaining proceeds of that capital raise within nine months.

Glenveagh’s business is weighted toward providing starter homes, 70 per cent of which are due to cost below €350,000. The group is targeting a sales figure of up to 70 properties per site per year.

Current residential developments include Cluain Adain in Navan, Proby Place in Blackrock and Taylor Hill in Balbriggan, where the first phase is due to finish by the end of this year.