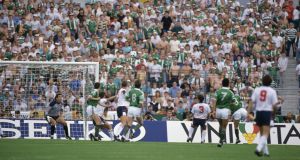 January 27th: The internet country code domain .ie is registered for the Republic of Ireland.

February 13th–28th: The Winter Olympics are held in Calgary, Canada featuring among others Eddie “The Eagle” Edwards.

March 16th: Three men are killed and 70 are wounded in a gun and grenade attack by loyalist paramilitary Michael Stone on mourners at Milltown cemetery in Belfast during the funerals of the three IRA members killed in Gibraltar.

March 19th: Two British army corporals are abducted, beaten and shot dead by Irish republicans after driving into the funeral cortège of IRA members killed in the Milltown cemetery attack.

April 30th: Ireland hosts the Eurovision Song Contest after Johnny Logan’s 1987 win with Hold Me Now. Pat Kenny and Michelle Rocca host the event at the RDS, which is won by a 20-year-old Celine Dion for Switzerland.

May 1st: The IRA kills three off-duty British soldiers in the Netherlands.

June 12th: The Republic of Ireland beat England 1–0 at Euro 88 in Stuttgart thanks to Ray Houghton’s header.

June 15th: The IRA kills six British soldiers in a bomb attack at the end of a charity marathon run in Lisburn on the border of Co Antrim and Co Down.

July 10th: Dublin marks its 1,000th birthday. The “tart with the cart” Molly Malone statue is unveiled on Grafton Street as part of the year-long celebrations, along with “the floozie in the jacuzzi” Anna Livia fountain on O’Connell Street. A 70ft figure of Gulliver made of fibreglass, aluminium and plywood also washes up on Dollymount Strand.

July 18th: Nelson Mandela, the jailed anti-apartheid leader, is awarded the freedom of the City of Dublin.

June 30th: Tipperary priest Patrick Ryan is arrested in Belgium as large quantities of cash and bomb-making equipment are found at his home. Britain attempts to extradite him on charges of supporting the IRA – which he denies – but in November the authorities send him back to Dublin sparking a major diplomatic row with prime minister Margaret Thatcher.

September 24th: Canada’s Ben Johnson wins the 100m final at the Olympics in Seoul, South Korea in what has been called “the dirtiest race in history”. Two days later, he was stripped of his gold medal.

October 19th: UK home secretary Douglas Hurd announces a broadcasting ban on interviews with IRA members. Broadcasters use subtitling and actors’ voices to get around the ban.

October 26th: The European Court of Human Rights rules in favour of David Norris in his case against the State over the criminalisation of consensual gay sex.

December 1st: The first World Aids Day is held as governments still struggle to control the spread of the disease.

December 21st: The Lockerbie bombing saw Pan Am Flight 103 exploding over Scotland, killing 243 passengers and 16 crew as well as 11 people on the ground. In 2003, Libya admitted responsibility for the terror attack.