Catalogue of fire-safety issues leaves owners facing bills of up to €26,000 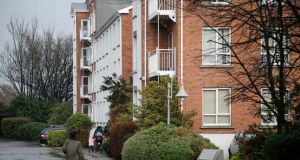 St James’s Wood fire risk: the owners of the 119 apartments have been told it could cost up to €26,000 each to remedy the issues. Photograph: Nick Bradshaw

A fire-safety audit of a Dublin apartment block was commissioned three years ago when a resident noted a pungent cooking smell coming from a neighbour’s property.

Few of the owners of the 119 apartments in St James’s Wood in Kilmainham would have thought that this smell, or any other issue with their property would leave them facing a potential repair bill of €3 million, or some €26,000 each. But that is where they find themselves.

This audit was not the first inspection to note issues with the complex, built by the Cosgrave Property Group in 2000.

A number of reports seen by The Irish Times show it has been suspected for some time that the complex was not built to the requirements of the fire-safety certificate granted for the development.

A summary of issues found by fire-safety consultants in several reports since 2013, and compiled by Val O’Brien & Associates, a chartered building surveyor, was given to the residents’ committee, St James’s Wood Management CLG, in February.

The summary notes a lack of fire-alarm sounders and emergency lighting, as well as widespread evidence of a lack of fire-stopping materials in wall cavities, waste pipes and air vents, which undermine the ability of apartments to contain a fire for 60 minutes and allow people to escape safely.

The surveyors tendered the required remedial work to three contractors, which quoted between €2.76 million and €3.38 million. This would amount to a charge of up to €20,375 or €26,239 for each apartment owner, depending on whether the apartment had two or three bedrooms.

Dublin Fire Brigade said the fire-safety officer had received “no complaints in relation to non-compliance with the granted fire-safety cert” for St James’s Wood.

Neither the residents’ committee nor the management company is obliged to report these issues to the fire officer. But sources say these are red-line issues that would result in a closure order were a complaint to be made and the block inspected by the fire-safety officer.

Committee-meeting minutes show that residents have been debating what action to take. They have stated their concern at not being able to pay for the remedial work, as well as their fear that their properties will be devalued if they become associated with fire-safety issues.

Minutes from a July 2017 meeting state: “The board confirmed that the best way forward is to park the decision on pursuing the developer legally and carry out remedial works . . . keeping the fire-safety works in St James Wood out of the public domain.”

At a meeting last June, a show of hands made it evident that “the blended approach of commencing remedial works whilst pursuing legal options was preferable among the members present”.

The Irish Times put a number of questions to Cosgrave Property Group, including if it was aware of these issues and if it intended to pay part of the cost of the remedial work required. The company said it would not be commenting on the matter.

Legal sources say that under Irish law the residents have little or no recourse with Cosgrave, as more than six years has passed since construction finished.

The first fire-safety report was commissioned in 2013 by Wyse, the block’s former property manager. It looked solely at the emergency-lighting and fire-alarm system.

A three-hour test by Fenlon Electrical Services in April 2013 found “many concerning points on our inspection”.

“There are an extremely large amount of fittings requiring attention . . . The escape route lighting in many areas are not functioning correctly,” the report stated.

It concluded: “We would strongly recommend a complete updating of the installation to the relevant standard set at the time of its design.”

Pro-Fire, a fire-safety engineering company, also found inadequate smoke detection in the basement car park during this 2013 review, recommending an upgrade to the detector coverage there.

Emergency lighting and fire detection are seen as “red line” compliance issues, vital to ensure the safety of occupants in the event of a fire.

The management company commissioned a more extensive fire-safety audit in 2015, after the complaint over the pungent cooking smell coming from a neighbour’s apartment. This caused concern because if fumes could move between apartments, smoke – or fire – might also be able to.

It also listed five grade-two issues, which would require repair or replacement but were not urgent. These included layout changes that were not in compliance with the granted fire-safety certificate.

Wyse ceased managing the complex in June. A letter from St James’s Wood Management CLG to residents said Wyse had resigned for “reasons related to the costs associated with the ongoing management” of the complex.

Core Estate Management, which was subsequently appointed property manager, did not respond to requests for comment.