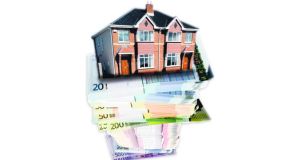 Many homes are no longer just a place to live. They've become a chunk of equity, a pension, and the children's inheritance all in one. Orna Mulcahy, Property Editor, looks at 10 years of property boom.

With back issues of The Irish Times available online, there is no need to keep old paper copies of the Property supplement. Still we do, if only to read them and weep.

Take 1995, the year most commentators agree was the beginning of the property boom. The Property supplements of that year are gathered in a slim bundle of yellowing paper. There's an air of history about them with their inky black-and-white photographs showing houses for sale at what now seem like ridiculously low prices. Anyone with £150,000 to spend could have had the pick of houses in Ranelagh while those with £5 million could have picked up a prime development site close to the city centre. "Only 2 per cent of houses valued over £250,000 for tax returns," we wrote in October 1995, referring to the 37,463 households that paid Residential Property Tax (RPT) in 1994. According to the Revenue Commissioners about 60 per cent valued their homes between £75,000 and £100,000.

RPT was scrapped in 1997 having failed to bring in the expected revenues to the Exchequer, but by then the Government was about to make a small fortune on stamp duty, with house prices soaring to a level that made economists nervous. By 1998 there was talk of the bubble bursting. Eight years on, we're still hearing dire predictions, with the Economic and Social Research Institute (ESRI) the latest to call for Government measures to slow down house prices.

"We've spent every year since 1995, beating the odds against some serious predictions of gloom," says Marian Finnegan, director of research at the Sherry FitzGerald chain, while also admitting that their own predictions were too timid.

Despite dire predictions from bodies as varied as the Organisation for Economic Co-operation and Development and the Economist, house prices continue to rise, with the latest Department of Environment figures showing a rise of 10.65 per cent in Dublin in the first half of 2005.

Dublin house prices have risen by just more than 180 per cent in the past 10 years, according to the Department. However, this is an average figure, calculated on mortgage approvals. It does not take into account the influx of cash into the market, fuelled by company sell-offs, cash-rich emigrants returning from overseas, and inherited wealth, all of which have been strong features of house-buying over the past 10 years.

It's been a roller-coaster decade, during which the average price of a house in the Dublin has increased from less than €90,000 to more than €400,000, and the overall average price has increased from approximately €75,000 to more than €300,000. In those 10 years we built a phenomenal half a million homes, and the price of the most expensive house in Dublin rose from about £1.5 million (about €1.9 million) to a staggering €58 million.

BUT BACK TO 1995. Estate agents were optimistic, having recovered from the market collapse of winter 1992/93, when the currency crisis sent interest rates to stratospheric levels. Tax incentives were drawing multinationals to relocate to the Republic, while a massive urban renewal programme was almost entirely fuelled by expensive tax breaks. The Government seemed happy to promote a building boom, even if it meant that adequate funding was not being made available for infrastructure - something that will take decades to remedy.

In January 1995 we told readers: "Overall, the Irish residential market remains remarkably sane and sensible", reminding people that in the UK, about one million householders had negative equity in their homes.

Property prices would rise, we said, but at a sensible rate. "And if an Irish buyer is tempted to pay a daft price for a house, the cautious approach of the lending agencies will usually put a halt to the gallop."

Still, there were hints of the frenzy to come when, early in 1995, 70 apartments at the Johnston Mooney site in Ballsbridge (now the Herbert Park Hotel and apartments) hit the market. The developers, Sheelin McSharry, sold the units themselves from a hastily assembled office, with buyers queuing outside for one-bedroom apartments priced from £60,000 - considered very strong money at the time.

Clonfadda, a vast Victorian pile with 7.5 acres and a herd of cattle on Mount Merrion Avenue in Blackrock, Co Dublin, was for sale for £2.5 million-plus, while in the city centre, a company called Chesterbridge was limbering up to pay £4 million for the 5.7 acre Sheriff Street flats complex in the docklands. Its directors were later to share more than £65 million on the sale of the apartments on the once notorious site.

One of Ireland's largest estates, Ballynatray House and its 1,130 acres of land on the Cork/Waterford border failed to sell for its £1.5 million guide, while in Dublin £550,000 was considered a knockout price for one of a typical three storey Victorian semi on Ailesbury Road. Interest rates ranged between 7 per cent and 10.9 per cent for a 10-year fixed mortgage (though hopefully not too many people took advantage of that generous offer).

People who bought substantial houses that year didn't know it, but their homes were about to earn as much or more as they did over the next decade. In 1998 alone, the average price rise in second-hand houses was nearly 28 per cent. And just like a Lotto jackpot, their winnings would be tax-free.

Now, for a whole generation of Dubliners, home is not simply somewhere to live. It's a substantial chunk of equity, a retirement fund, the foundation of a property portfolio and the children's inheritance all rolled into one.

For every happy householder with a million or two in equity in their redbrick home, there's a tortured soul who could now be retired and working their French vineyard if only they had bought at a time when money was expensive but property was cheap.

BY 1998, INVESTORS had entered the market in earnest, according to Gunne's Frank Doonan, writing in The Irish Times. "Roughly 20 per cent of all residences are being bought for investment purposes. Many investors are young professionals who see residential property as offering better returns on capital than many other sectors."

In reality, homeowners were trading up, and holding onto their first home as investment, then buying a section 23 apartment to soak up their rental income.

The rush to buy investment property inevitably pushed out the first-time buyers, and when the Government came under pressure to stop it, they cleverly passed the ball to Peter Bacon, a top economist, who came up with a series of measures including the abolition of mortgage interest relief and the introduction of stamp duty on new homes for investors. The measures failed to alleviate the misery of first-time buyers, though the Government could always claim that it had tried to help.

Meanwhile, housing output continued to rise dramatically, and although investors stayed away for a while, they were back in full strength when then minister for finance Charlie McCreevy reintroduced mortgage relief in 2001. The end result of the Bacon measures will probably mean that future governments will be reluctant to interfere in the housing market.

THE PROPERTY MARKET powered on, through 2000, and through the slump in the IT sector in 2001, pausing for a while to consider the effects of 9/11. By the end of that year, pundits were predicting trouble ahead in the property market, while in real terms expensive homes were slow to sell and vendors were forced to take a cut in prices to sell. It was a temporary respite and those who waited around for prices to fall back further were disappointed. David McWilliams warned Sunday Business Post readers that there would be no rapid recovery for the Irish economy or the housing market.

This was not to be the case. Instead, losses in the stock market and exposure of pension funds encouraged people to turn to property investments in earnest. People began to refer to property purchases as their "pensions". Bricks and mortar beat equities hands down. By 2002 the race was on again. At the end of that year, Anthuan Xavier, managing partner of Simpson Xavier declared his worst investment had been in Baltimore Technology and Elan, while his best had been property. "I believe the Irish property market will remain buoyant following the drop in interest rates," he said, and he was right, with Dublin house prices rising by 11.5 per cent in 2002 and 18.65 per cent in 2003. And though things slowed from November 2004 to November 2005 when house prices grew by 8.2 per cent, property prices in the second half of the year escalated at 5.4 per cent - more than twice the growth rate of 2.6 per cent in the first half.

With interest rates at a historically low level, there seemed no end to the appetite for property, but suddenly Ireland began to seem very expensive. Those who felt priced out of the local market, as well as some who had done exceptionally well through capital appreciation here, began to look at investment opportunities overseas.

Within a few years almost half the country - and it seemed every taxi driver in Dublin - had acquired a holiday home on the Costas, or a little bit of Budapest or Bulgaria. Meanwhile, the serious money - €5 billion in 2005 - was invested in commercial property in the UK, Eastern and central Europe and more recently in the US.

The Irish are now seen as important players in the global property market, loved by estate agents throughout the world because, as one New York dealer put it recently, "They don't mess around, they buy". Even if they don't have a clue what they're doing, it seems.

One businessman described having a "shoeshine moment" when a friend of his announced he was going to buy apartments in Albania, sight unseen. With property exhibitions being staged most weekends in Dublin and throughout the country, a huge variety of overseas property is being pitched at the Irish, from beach lots in Mauritius to a slice of the "new Caribbean" Cape Verde down by the African coast. While some investors have done well, building up modest portfolios in Eastern Europe, the Mediterranean countries and Florida, there are plenty more who are likely to be saddled with something down a dusty track in the hinterland, hours from the airport, or worse, a property with a dodgy title that's hard to sell.

Back home, the question is whether house prices can keep on rising? The answer is, it depends on who you talk to. A stockbroker who sold his large Monkstown home last summer felt it was time to take his money out of Dublin property, which made the neighbours nervous.

However, since then, prices of similar properties have accelerated. According to one estate agent there is a "depressingly high" number of people in houses worth €2 million plus wanting to trade up to houses worth €4 million plus. At the lower end of the market, first-time buyers are borrowing record amounts to get onto the ladder, and getting cash from their parents too.

Interest rates are on the rise, and years of double-digit price increases have made most sectors of the market very expensive.

However, if you want to make money in property in 2006 there is still value to be had, particularly in small but well located houses that need a makeover. "The idea is to buy a dog of a property on an otherwise good street," advised BusinessWeek magazine recently. It's sound advice, so long as you can bear to have the builders in.