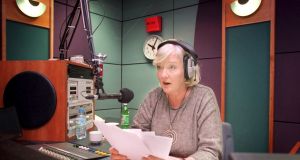 Marian Finucane, in studio at RTÉ Radio One, in 1999. Photograph: Dara Mac Donaill

Marian Finucane, who died unexpectedly at her home in Co Kildare aged 69, is one of a small number of people instantly recognised in Ireland by their first name only. That familiarity is testament to the intimacy of her relationship with listeners to RTÉ radio in an outstanding broadcasting career that has lasted more than four decades.

The suddenness of her death unleashed an affection and respect for a trailblazing broadcaster, who has punctuated generations of social change in Ireland with a mix of incisive skill, empathy and an ability to sense, and voice, the question on her audience’s lips.

That Finucane moved from firebrand, championing “women’s issues” on air, into one of the country’s finest and most-trusted broadcasters, is testament to the social changes she and her generation presided over. As Finucane’s career progressed, she offered not the woman’s angle only, but the human angle, and in the process became one of the country’s finest and most-acclaimed broadcasters.

She brought a forensic skill, and a skill of asking the obvious questions

In a career spanning almost five decades, Finucane was at the forefront of media and social change in Irish life and yet, as a journalist and RTÉ broadcaster she was obligated to remain unbiased and fair. The balancing act was approached, and mostly achieved, with deft skill, a lightness of touch, empathy, doggedness and wisdom.

An innovative broadcaster, a natural on radio, she led the way in opening up the constrained lives and concerns of women in the ground-breaking Women Today on radio, and later The Women’s Programme on TV, co-presented with Doireann Ní Bhriain. She was first to present the Liveline phone-in show, and later opened up the moribund weekend morning radio with her eponymous shows.

“Hello there and a very good morning to you ...”: Her familiar and distinctive voice may have become deeper, slower and throatier over the years, but it was still compelling, and continued to offer a steer to the nation, reflecting Ireland back to itself, and garnering big numbers in the ratings over decades.

Finucane grew up in Glasnevin, Dublin, the youngest child of five, her father Daniel was a Garda sergeant, her mother Maura a teacher at Francis Xavier School (where she was allowed to continue teaching after marriage – an exception to the norm at the time). Both were from Ballydesmond in Cork; her father died when she was 12. Finucane went to the all-Irish secondary Scoil Caitríona, where the Dominican sisters fostered pride in their students’ intellect and encouraged the girls to pursue careers.

Because she was young doing her Leaving Certificate at 16, she then boarded for a year at St Louis Convent in Monaghan, an experience she hated. She was good at maths and physics and went on to study architecture at the College of Technology, Bolton Street, one of three girls in a class of about 40.

She became involved in protests against the destruction of Georgian Dublin by developers in the late 1960s, occupying a building on St Stephen’s Green in Dublin. When asked by an interviewer why she was protesting, she replied, “Because I feel it’s part of my responsibility to make sure this building isn’t demolished”.

Interested in politics and debating since her schooldays, in 1971 she was the first woman to win best individual speaker in the annual Irish Times debating competition, representing Bolton Street.

But her career path diverted from architecture after a chance meeting with broadcaster John O’Donoghue at a party, when he suggested she apply for a job in RTÉ. After some failed attempts, she was eventually hired as a continuity announcer in 1974, and got a break when journalist Eoghan Harris, who was an RTÉ producer at the time, chose her to co-present a radio books programme Paper Chase. There followed a stint as reporter on current-affairs programme Day by Day.

She brought, a later producer colleague Kate Shanahan has observed, some architectural skills into broadcasting: a forensic skill, and a skill of asking the obvious questions.

In May 1979 she started presenting a radio show whose time had come, Women Today, which brought issues from reproductive rights to discrimination at work into public debate, and women’s voices to the fore. Working alongside her were Michael Littleton, Patrick Farrelly, Clare Duignan, Betty Purcell – many of whom became lifelong friends of hers.

Purcell observes of her that “she was brave when it was hard to be brave”, and she never backed down, recalling how the programme was regularly under fire from bishops and Knights of Columbanus. She – and many other former colleagues – says Finucane stuck by her production team. “We always felt she had our back.”

In 1986 she moved to present a new phone-in radio programme – Liveline, another perfect vehicle for her skills for making people feel at ease and speak their minds, as if they were just talking to her individually rather than broadcasting to the nation. Joe Duffy, who followed in her footsteps there, says, “She invented Liveline and she was the voice of reason”.

Finucane recounted later how an offer from Newstalk radio station helped her negotiation in starting to broadcast on Saturday and Sunday mornings in 2005. It was a previously dead broadcasting slot, but “demographics had changed and the day housewives were listening to Gay were long gone. I had a gut feeling there was a weekend audience there so I stayed.”

Finucane was 'important because she was a trailblazer, she was honest. She always moved agendas, she just went on blazing that trail, she wasn’t afraid of Church or State.'

The popular Marian Finucane Show regularly ranked among RTÉ’s highest listenership. She was ringmaster to a panel discussing the week’s events and the day’s newspapers, by turns detached, bemused, and incisive, and her skill for one-to-one connection made for some memorable interviews.

Finucane’s style was comfortable, charming, curious and disarming. Her sometimes cheery and faux innocence, repeating the question, belied her action going in for the kill or looking for what lay beneath. Unflappable, professional and calm, at her best she was a mix of empathy and affability with unflinching probing of sometimes evasive developers, bankers and politicians.

Her telling post-crash-and-bailout interview with ex-Anglo chief Seán Fitzpatrick in October 2008 had him declare he couldn’t “say sorry with any degree of sincerity and decency. But I can say thank you.”

Her 2008 interview with her close friend, writer Nuala O’Faoláin, was raw, unflinching and moving. Weeks before she died, O’Faoláin shared why she had refused chemotherapy: “I was just reading about some best-selling man who says ‘Live your dream to the end’ and I don’t despise anyone who does, but I don’t see it that way. Even if I gained time through chemotherapy, it isn’t time I want. Because as soon as I knew I was going to die soon, the goodness went out of life.”

Former president Mary Robinson said, “Nobody else could have done that interview.” Among the many tributes this week, Robinson said Finucane was “important because she was a trailblazer, she was honest. She always moved agendas, she just went on blazing that trail, she wasn’t afraid of Church or State.”

Archbishop Diarmuid Martin said he was interviewed by her many times, usually at difficult times. “Even after a tough interview, you went away knowing she was fair. She had her convictions and respected the convictions of others. There was an honesty about her work.”

In latter years her broadcasting came in for some criticism for going off the boil. Her level of pay also came under scrutiny – she earned half a million a year from RTÉ at one point, though this was cut back, along with other high-earning broadcasters, more recently. She was unapologetic, saying, “It was what the market was, because I’d had offers from other stations... And anyway – why shouldn’t the girls get it if the boys are getting it?”

For all that, early in her career she opened up gender issues – equality, family rights, birth control. She observed, “I’ve never experienced sexism directed at me – ever. I never had a difficulty with men.” While she didn’t get on with a couple of her women bosses, she was part of excellent teams with other women colleagues over the years – Clare Duignan, Purcell, Ní Bhriain, Anne Farrell, Margaret Curley.

In her early 20s, Finucane had a short-lived marriage to architect Larry Granville.

She married John Clarke in 2015 after more than 30 years together. She avoided celebrity and publicity, and they lived on a farm in Co Kildare, and had two children Sinead and Jack together, as well as his three sons Jocelyn, Neil and Timothy. Her son Jack married last year.

The close and private family had been devastated by the death of Sinead from leukaemia, aged eight, in 1990. It was a tragedy Finucane felt unable to talk about. She admitted, “It never goes away. I have the height of respect and admiration for people who have been bereaved and who can talk about it. I just blubber.”

Her friend and producer Betty Purcell observes she was motivated – for example on Women Today – by an awareness of those with less good fortune than her, and a desire to help. That awareness, and the death of her daughter, drove some of her philanthropic work in recent years. She worked with hospice charities, following the support her family had received when Sinead was ill.

Nearly 20 years ago on a visit to South Africa, she and Clarke witnessed the impact of HIV in a place “where they were nursing these babies and small children to death because there was nothing that could be done for them”. Since then, the charitable foundation they set up and run, Friends in Ireland, had absorbed them. It helps orphaned and vulnerable children with HIV.

The work, on the outskirts of Capetown and on the eastern Cape, includes a hospice, orphan homes, outreach units feeding over 600 children daily (two million children over the past 18 years), education and a HIV hospital outpatients’ department. A 2004 documentary Marian’s Journey followed Finucane and Clarke’s work there.

In 1979 Finucane won a Jacobs’ Award for Women Today. Her documentary following a woman’s journey to England for an abortion won her a Prix Italia in 1980. She was Radio Journalist of the Year in 1988, and was awarded an honorary doctorate by DIT in recognition of her achievements in journalism and broadcasting in 2002.

After a few weeks off in December, Finucane was due back on radio this weekend. In a 2013 interview she said: “I have no plans to retire. RTÉ is so much a part of me and my life, and my identity internally. I really love doing radio programmes. Sometimes I think how lucky am I to be part of the national conversation, to be meeting all these extraordinarily interesting, or boring”, she chuckles, “people and to engage with them.”

Marian Finucane is survived by her husband John Clarke, their son Jack, and her stepsons Jocelyn, Neil and Timothy.