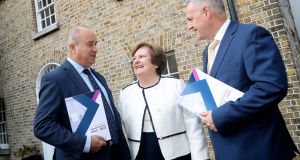 The length of time patients are spending on waiting lists is “morally wrong” and “not ethical”, the president of the Medical Council has said.

Dr Rita Doyle said Government and the Department of Health need to recruit more doctors, particularly specialists, in order to fix issues in the health system that are “just not right”.

“I think the public system is high standard but the access to it is just horrendous for patients, and the reason the access is horrendous is because there aren’t enough doctors,” Dr Doyle said.

“For example, the OECD equivalent for dermatologists in this country is 121 and we have 40. It’s a huge difference. If you’ve got a bad skin condition, you could be waiting two years. That’s not moral.”

The president of the regulatory body said the shortage of staff is the reason behind the number of complaints the organisation receives about bedside manner and communication.

Of the 396 complaints received by the body last year, almost 20 per cent related to medical professionals being accused of failing to communicate properly.

“It [communication failure] goes right across the board, in every branch of the profession. Less, I would think, among GPs because they wouldn’t survive if they couldn’t communicate,” Dr Doyle said. “But occasionally, you might get a case where a doctor is tired and at the end of the day says something rude, or something like ‘not you again’, or something like that.

“What the patient doesn’t realise, and it isn’t their job to realise, [is] that you might be patient number 42 today. Everybody is too busy. It’s just human.”

She added: “You wouldn’t let a pilot fly a plane if they had been working for 19 hours. If you’ve too many patients, it’s not safe. There is a safe number that can be seen in a day and the patients are suffering.”

Dr Doyle was speaking at the launch of the Medical Council’s five-year strategy on Wednesday, which sets out six key objectives.

The strategy states that among the council’s aims are to ensure medical regulation protects the public and supports practitioners; to ensure consistency in the quality of standards; to improve the understanding of the council; to review and recommend changes to legislation, and to develop the council to become more engaged to deliver a more efficient model of regulation.

Bill Prasifka, chief executive of the council, said the new strategy will focus on protecting patients and supporting doctors.

“Central to the development of this strategy, the Medical Council has articulated that it will, through the application of right touch regulation, influence changes within the health system required to support the provision of safe, quality healthcare,” Mr Prasifka said.

In response to the comments from the council, the Department of Health said it acknowledges that waiting lists are too long in certain parts of the country.

“It is acknowledged that recruitment and retention of consultants and doctors who have completed some or all of their training is a significant challenge for our health services at present,” a spokeswoman said.

“The Pay Commission recognised that the pay gap between serving and new entrant consultants is a key factor. Minister [for Health Simon] Harris and department officials have met with the IHCA [the Irish Hospital Consultants Association] on this issue in recent months. The Minister also stated at the IMO [Irish Medical Organisation] conference earlier this year that he wished to address it.”

“Minister Harris is already scheduled to meet Dr Doyle later this month and looks forward to working with her in addressing the issues raised by the council,” the spokeswoman added.