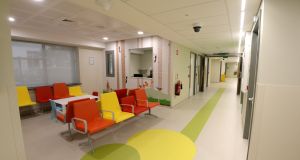 Fewer than 10 children a day are attending the new paediatric urgent care centre in Blanchardstown, the first phase of the national children’s hospital project, since it opened at the end of July.

Attendances at the centre, which opened amid controversy over last-minute restrictions to its opening hours, are running at under half the expected levels, figures from Children’s Health Ireland (CHI) show.

The upside for families attending the new facility is that in contrast to many other hospitals where delays are endemic, children spent an average of just 90 minutes from registration to treatment and discharge.

Since it opened its doors on July 31st, 127 children have presented to the urgent care centre, which is located at Connolly Hospital in Blanchardstown.

Before the centre opened, CHI said it expected about 500 attendances at the urgent care centre in the month of August.

The projected cost of the Blanchardstown and Tallaght satellites was put at €49 million in 2017, but has since been revised upwards to €66 million.

About three-quarters of children have attended Blanchardstown with injuries, while the remainder presented with viral illnesses and gastroenteritis.

Just four children were transferred to children’s hospitals at Temple Street, Crumlin or Tallaght, while the rest were discharged to their homes.

It was originally envisaged the facility would open from 7.30am to 10pm, seven days a week. However, its hours of operation were restricted days before opening due to a shortage of senior doctors.

As a result, the urgent care centre now opens from 10am to 5pm, Monday to Friday, only.

CHI said this was a “phased” opening in line with best practice, and that “over time”, it would move to a seven-day week model.

Three outpatient clinics in Blanchardstown – in general paediatrics, fracture clinics and child sexual abuse assessment and therapy – have seen 142 children since the centre opened, according to CHI. It said these clinics would help reduce outpatient waiting times for children in the wider health system.

The Blanchardstown unit is supposed to be staffed by 13 consultants but only 10 of these posts have been filled.

CHI said it was fully staffed to meet current hours of opening and these would be extended as more consultants were recruited.