Vitamin B3 could prevent miscarriages and defects, study suggests 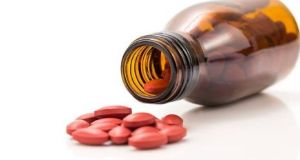 The authors suggest giving women Vitamin B3 (niacin) supplements before and during pregnancy could significantly cut the rate of miscarriages and congenital malformations globally. File photograph: iStockPhoto

Scientists in Australia have identified a major cause of miscarriages and multiple birth defects that could change the way women prepare for pregnancy.

They have called it “a double breakthrough”, as they found both a cause and a preventative solution.

Publishing their findings in the New England Journal of Medicine, the authors suggest giving women Vitamin B3 (niacin) supplements before and during pregnancy could significantly cut the rate of miscarriages and congenital malformations globally.

Vitamin B3 is typically found in meats and green vegetables, while most pregnancy multivitamins contain niacin. It is also found in the yeast extract product Marmite.

With 7.9 million babies born each year with a birth defect worldwide, the team hopes the benefits are wide-reaching. Experts have advised, however, that the findings “cannot be translated into recommendations” for pregnancy – as there are many causes of miscarriage.

The researchers analysed the DNA of four families where the mothers had suffered multiple miscarriages or their babies were born with multiple birth defects, such as heart, kidney, vertebrae and cleft palate problems.

They found mutations in two genes that caused the child to be deficient in NAD, which allows cells to generate energy and organs to develop normally.

Lead researcher Prof Sally Dunwoodie replicated these mutations in mice but found they could be corrected if the pregnant mother took niacin (vitamin B3).

“You can boost your levels of NAD and completely prevent the miscarriages and birth defects. It bypasses the genetic problem,” she said. “It’s rare that you find a cause and a prevention in the same study. And the prevention is so simple, it’s a vitamin,” she added.

Niacin deficiency is not as widespread as folate deficiency in the population where a balanced diet is being consumed. But a recent US study of over 560 women taking pregnancy multivitamins found one third had low levels of vitamin B3 in their first trimester of pregnancy, suggesting pregnant women were either not absorbing enough niacin from the foods they ate, or they may need more niacin than pregnancy supplements provide.

The Australian researchers do not claim to have found the source of all birth defects and miscarriages, or that boosting niacin levels can prevent all malformations.

“The findings might be restricted to families with multiple miscarriages and multiple birth defects, but it could have far broader relevance and affect many more families [at risk of having] babies with just one defect,” Prof Dunwoodie said.

The study, carried out over a 12-year period, could impact on one on four pregnancies that result in miscarriage in Ireland, with this rate rising significantly once women are over 35, according to an IVF expert.

Prof Simon Fishel, director of Beacon CARE Fertility in Dublin, said: “While an intriguing and potentially important scientific study, which has been well conducted, it must be recognised that miscarriage has many causes.”

Prof Fischel, an expert in fertility research and member of the team that pioneered IVF treatment, pointed out that the largest single cause of miscarriage was chromosome errors, “and what we find in mouse modelling needs to be of proven medical concern in humans”.

As Vitamin B3 is fairly ubiquitous in foods, “NAD deficiency is more likely to be associated with a defective gene, or metabolic process; so discovering who is or is likely to require Niacin supplementation is crucial to understanding its value,” he added.

Dr Katie Morris, an expert in foetal medicine at the University of Birmingham, told the BBC: “While exciting, this discovery cannot be translated into recommendations for pregnant women, who at most may be deficient in vitamin B3.

“The doses used in this research were 10 times the recommended daily doses for supplementation in women.”

The side-effects of this high dosage were not known, with pregnancy complications often occurring because of the complex interaction of a number of factors, she said.

For now, Prof Dunwoodie recommended pregnant women take a pregnancy-specific multivitamin, which includes the advised 18 milligrams of niacin. “But, we’re not all the same in how we absorb nutrients,” she said, adding that body mass index and diabetes can influence how a woman produces NAD.

She added: “We don’t know who these women are that don’t make sufficient levels, so that will be the next thing to study.”