The HPV vaccine: why it’s important for girls to receive it 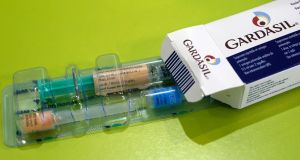 Gardasil is the vaccine used in the vaccination programme for girls in their first year of secondary school. Photograph: Vincent Kessler/Reuters

The human papilloma virus is a group of more than 200 viruses. Most people who will get a HPV infection will do so through sexual activity.

Most such infections do not need treatment, but they can cause genital warts.

In some women HPV infection causes changes in the cervix (the neck of the uterus) that can develop into cervical cancer over time.

How is HPV transmitted?

HPV can be transmitted during sexual intercourse or skin-to-skin contact with an infected person. Transmission from mother to baby can also occur immediately before or after birth.

How common is cervical cancer?

What is the vaccination programme?

The HSE began the HPV vaccination programme in September 2010, following a recommendation by the national immunisation advisory committee. Girls in first year at second level are offered the vaccine free of charge.

All girls under 15 at the first dose require two doses of the vaccine given at least six months apart.

Girls will receive a record of their vaccinations in an immunisation “passport”, and their details are also shared with CervicalCheck – the national cervical screening programme – so they may be called for cervical smear tests later in life.

While the vaccine protects against seven out of 10 cervical cancers, there are still cancers that are hard to detect, so it is important for women to have regular smear tests after the age of 25.

What vaccinations are available?

What vaccine is used in the HSE programme?

Gardasil is the vaccine used in the vaccination programme for girls in their first year of secondary school.

How does Gardasil vaccine work?

The body reacts to the vaccine by making antibodies, which help the immune system fight HPV infection. Public health experts say the vaccine is over 99 per cent effective in preventing pre-cancers associated with HPV types 16 and 18 in young women and 99 per cent effective in preventing genital warts associated with HPV types 6 and 11.

Is the vaccine safe?

Multiple studies and examinations worldwide by public health experts have concluded that the vaccination is extremely safe.

Dr Colette Bonner, deputy chief medical officer of the Department of Health told the Oireachtas health committee in December 2015, at a session with representatives of the Regret group, that she was aware of reports of serious health problems alleged to have occurred following HPV vaccination.

Dr Bonner said she had great sympathy for any family caring for a sick child, but that this did not mean the symptoms had been caused by the HPV vaccine.

“Over 170,000 girls in Ireland and up to 63 million girls worldwide have received this important cancer-preventing vaccine. The vast majority of reported side-effects have been consistent with the expected pattern of short-term adverse side effects for the vaccine,” she said.

An examination by the European Medicines Agency of reported conditions involving pain in limbs, and a syndrome causing dizziness, chest pain and weakness, did not support a causal link between the conditions and the vaccine.

Where can I get further information?