‘At least 40’ will die because of drop in HPV vaccinations 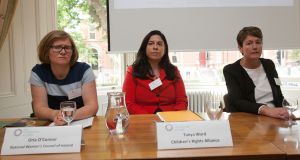 At least 40 women will die from cervical cancer as a result of the dramatic fall last year in the number of girls taking up a life-saving vaccine in secondary schools, the Irish Cancer Society has said.

The charity said urgent action was required to address the reduced uptake of the HPV vaccine by girls in their first year of secondary school. It protects against certain strains of the human papilloma virus, which causes about seven out of 10 cervical cancers.

The rate of vaccination reached about 87 per cent in the 2014/2015 academic year but fell last year to 50 per cent, largely due to what the society said was misinformation about the vaccine spreading on social media.

About 30 organisations in the health, children’s advocacy, women’s rights, and education sectors announced on Wednesday they had formed the HPV Vaccination Alliance, with the objective of reversing that misinformation.

The Irish Cancer Society and the other organisations signed a “contract against cancer” and said they all endorsed the HPV vaccine as a “proven and safe way to protect from cancers which can destroy and end lives”.

This year up to 420 people in Ireland will be diagnosed with a cancer caused by a HPV infection. Almost 300 of these will be cancers of the cervix.

About 90 women will die from cervical cancer and those who survive will need intensive treatment such as surgery, radiotherapy and chemotherapy.

Some 6,500 women will need hospital treatment to remove pre-cancerous growths in their cervix caused by HPV.

Donal Buggy of the Irish Cancer Society said more than 100 million girls had been vaccinated worldwide and research by multiple independent international experts had found no differences in the rates of serious illnesses – such as those mentioned by Regret – between vaccinated and unvaccinated individuals.

Prof Gráinne Flannelly, consultant obstetrician and gynaecologist at the National Maternity Hospital Holles Street and clinical director of the national CervicalCheck screening programme, said: “The combination of HPV vaccination and a world-class screening programme gives us a real opportunity to eliminate cervical cancer from Irish women in future generations.”

She asked parents making the decision about vaccinating their daughters to try to “press the fast-forward button” and to map out what was going to happen to them as 25 year olds.

“If that cohort is not vaccinated, by the time they are 25, their chances of actually having an infection that could give them cervical cancer is 30 per cent.”

In Australia, that rate of infection dropped to 4 per cent in cohorts where there had been high rates of vaccination.

Prof Flannelly said the message to parents was not to hesitate.

“Protect your daughters and in case of any uncertainty talk to members of the alliance, talk to your family, talk to your general physician and get the information.”

Director of the National Women’s Council of Ireland, Orla O’Connor, said the side effects of treatment for cervical cancers left “lasting consequences which young women and their parents will have to live with for the rest of their lives”.

“No woman should have the choice of having a biological family taken away from them because they did not receive a safe and life-saving vaccine,” she said.

Tanya Ward, chief executive of the Children’s Rights Alliance, said children had a right to “the highest attainable standards of healthcare and that includes the right to benefit from immunisation and vaccination”.

The drop to 50 per cent in the vaccination rate last year was the equivalent of 19,000 girls which was a “national scandal”.