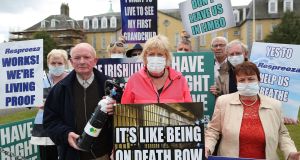 Members of the Alpha-1 Action Group protesting outside the offices of the HSE in Dublin on Tuesday. Photograph: Julien Behal

Pharmaceutical manufacturer CSL Behring has decided to extend a compassionate use programme for its Respreeza drug in the State after the company came under fire over the timing of its closure.

The Respreeza drug had been provided on compassionate grounds by the US company for the last decade to 21 Irish patients who suffer from the rare Alpha-1 lung condition following a series of clinical trials.

Health authorities had been in negotiations with the company with a view to publicly funding the drug, but the HSE announced earlier this week that a successful resolution had not been reached.

Alpha-1 causes emphysema and associated breathing difficulties and susceptibility to chest infections, and it is claimed that up to 60 patients could benefit from the drug which the HSE says would cost €81,000 per patient annually.

The compassionate use programme was due to be axed at the end of this month but has now been pushed out to the end of September.

A spokeswoman for CSL Behring said this decision was taken in order to “give patients time to work in full consultation with their medical team”. The company said it was also evaluating the possibility of placing patients on further Alpha-1 trials.

Speaking on RTÉ’s Morning Ireland on Thursday the head of the National Centre for Pharmacoeconomics Prof Michael Barry questioned the company’s motivations for pulling its compassionate scheme soon after the decision not to publicly fund Respreeza was made.

“What we’re seeing more and more is, if there’s a negative decision on reimbursement then compassion seems to be lost and they pull the drug. I don’t think that’s very compassionate.

“I think that anybody who takes part in a compassionate access programme should be guaranteed the drug regardless of the outcome in relation to reimbursement.”

In a statement released on Thursday the Alpha-1 Foundation, which advocates for sufferers of the condition, called on the manufacturer to reconsider withdrawing free access to Respreeza and asked it to “show generosity of spirit in putting patients first”.

Responding to comments from Prof Barry that the drug does not show any effect on lung function and quality of life, consultant respiratory physician and Alpha-1 Foundation chairman Prof Noel McElvaney said Respreeza had been proven to “unequivocally decrease progression of emphysema”.

Prof McElvaney also questioned Prof Barry’s ability to make a call on whether the drug actually works, and accused health officials of confusing the issue of clinical efficacy with considerations around cost effectiveness.

Campaigners have called on Minister for Health Simon Harris to overturn the decision not to publicly fund Respreeza, a stance which has been echoed by Fianna Fáil.

“Minister Harris cannot allow this decision stand and must provide leadership. The Minister must also show political will and support. If he does, I have no doubt that a successful outcome to these negotiations can be found,” said the party’s health spokesman Billy Kelleher.

“He cannot leave these 21 patients in limbo worried and concerned for their wellbeing and future health.”

Meanwhile, the Department of Health on Thursday announced the opening of a public consultation on biosimilar medicines, which are described as cheaper alternatives to approved medicines for which the patent has expired.

Likened to generic versions of over-the-counter medications, Mr Harris said Ireland could capitalise on the availability of new biosimilar medicines “to deliver more for patients and taxpayers”.

Moves to normalise the use of biosimilars come following a series of high-profile disagreements between the State and drugs companies over the price of patented medications, most notably the prolonged dispute over the cystic fibrosis treatment Orkambi which was resolved in April.