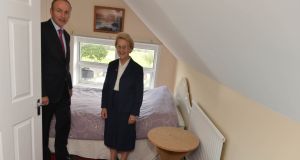 A three-storey former B&B that was refurbished a decade ago by an addiction-treatment charity to operate as a step-down facility is to finally open next month after the HSE gave the go-ahead to allocate funds for the project.

Cuan Mhuire, which treats people addicted to alcohol, drugs and gambling, bought the 16-bedroom house on the Western Road in Cork city for €2.1 million in 2007. Its aim was for it to be a supportive environment for people who had left rehab and needed help as they continued their journey to sobriety.

However, Cuan Mhuire had to put the project on hold because authorities did not provide the money to run the facility. It was refurbished in 2008 and lay idle, although it was fit for purpose as a step-down facility.

Fine Gael Senator Colm Burke said it had now secured the €300,000 from the HSE necessary to fund the project annually.

“It will operate as a step-down facility for people who need extra supports. It involves no capital costs. They just needed the funding to run it. It is a state-of-the-art facility. The aim is to have it open by January 7th. Hopefully it will help a lot of people.”

The project is in turn-key condition and could start accommodating people almost immediately.