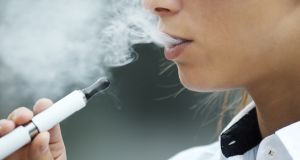 Vaping stiffens the arteries leading to a variety of health problems, according to a comprehensive study published in the European Heart Journal.

Vaping may also increase the risk of people being infected by Covid-19, suffering worse symptoms and dying from it.

Researchers at the University of Mainz in Germany have made the world’s first comparison of the effects of the three forms of smoking and vaping on human health and the function of cells that line blood vessels (the endothelium).

The researchers found there were multiple good studies showing that, overall, tobacco cigarettes were more harmful than e-cigarettes.

They added that the long-term effects of water pipes and e-cigarettes need to be investigated more thoroughly.

Compared to non-smokers, tobacco cigarettes increase the risk of chronic obstructive pulmonary disease (COPD) by 704 per cent, waterpipes by 214 per cent and e-cigarettes by 194 per cent.

COPD, a lung disease, is the most common chronic disease in Ireland with almost 400,000 sufferers. It is commonly associated with smoking and is particularly prevalent in the more vulnerable in society including people from areas with high social deprivation.

Tobacco cigarettes and waterpipes increased the risk of lung cancer by 1,210 per cent and 122 per cent respectively, while the level of evidence for e-cigarettes was not sufficient to draw reliable conclusions.

The researchers also looked at how much the three smoking techniques stiffened the arteries, an important prognostic indicator for the risk of heart problems and stroke.

Compared to non-smokers, tobacco cigarettes increased arterial stiffness by 10 per cent, waterpipes by 9 per cent and e-cigarettes by 7 per cent.

The first author of the review, Prof Thomas Münzel said: “Our review focuses primarily on the adverse effects of these three smoking and vaping techniques on endothelial dysfunction and the relation to oxidative stress and, secondly, on clinical disease.

“All three forms of smoking and vaping lead to increased production of oxygen-derived free radicals in blood vessel tissue, such as superoxide.

“This breaks down nitric oxide, which is released by the endothelium, and is important for helping blood vessels to dilate and for protecting against inflammation and clogging of the arteries.”

The researchers say the main toxic chemicals in e-cigarette vapour include formaldehyde and acrolein, as well as traces of chemicals called transition metals and volatile organic compounds (VOCs), all of which are known to damage cells.

Nicotine is present in all three tobacco products, is addictive and is responsible for harmful biological effects as well as, to a minor extent, some beneficial effects.

Prof Münzel said: “These different as well as overlapping profiles of toxic compounds may be a key to understand the similarities and differences in the adverse health effects of smoking and vaping, and should be further investigated in detail by future studies.”

The researchers concluded: “As outlined by the World Health Organisation (WHO), tobacco cigarette and waterpipe smoking may contribute to increased burden of symptoms due to Covid-19 compared to non-smoking, including being admitted to intensive care, requiring mechanical ventilation, and suffering severe health consequences.

“There is no doubt that smoking cessation is and will remain the most powerful approach to prevent smoking-induced cardiovascular and respiratory disease.

“This may be even more important in light of the Covid-19 pandemic as the use of tobacco products likely increases the risk for Covid-19 associated cardiovascular and other severe complications in smokers and vapers.

“The WHO also warns that although e-cigarettes appear to be less harmful than tobacco cigarettes, there is growing evidence that they also may cause side effects in the lungs, heart and blood vessels and that e-cigarette use may increase the risk of Covid-19 infection.”