Face masks should be mandatory in Irish shops, says immunologist

Unions concerned about capacity and enforcement on public transport 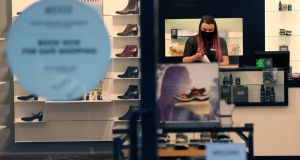 The wearing of face coverings should be made mandatory in Irish supermarkets, an immunologist has said.

Kingston Mills professor of experimental immunology at Trinity College Dublin, said the requirement to wear masks on public transport, expected to be signed off by the Government today, should also be extended to shops as Ireland eases coronavirus lockdown measures.

“The requirement (face masks on public transport) should extend to supermarkets. I’ve read reports that it’s (compliance) 41 per cent, but I’ve been to the local supermarket and often I’m the only one wearing a mask. It’s more like five per cent,” he told Newstalk Breakfast .

Mr O’Leary told the same radio programme that he had made many complaints about Mr Ross over the years, but in this case he was optimistic that the Minister was doing something positive.

However, Mr O’Leary expressed concern that while the wearing of face masks was going to be compulsory, there was still an issue with capacity.

“Next Monday people will be returning to work, it’s going to be difficult, social distancing is going to present many challenges.”

Mr O’Leary also said that it was going to be difficult to police the capacity issue and face masks, this was not a job that a bus driver or frontline staff on the rail network should have to deal with, he added.

“The last thing we want is conflict between drivers and passengers or between passengers.”

There is a role for the gardaí, the transport companies and the National Transport Authority, he added.