Over 80 patients waiting for admission to University Hospital Limerick 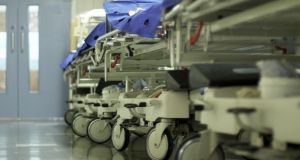 Overcrowding at University Hospital Limerick has again hit record levels, with 81 patients waiting for admission in its emergency department on Tuesday.

Overcrowding at University Hospital Limerick has again hit record levels, with 81 patients waiting for admission in its emergency department on Tuesday.

It is the fourth time this year that the Irish Nurses and Midwives Organisation (INMO) has counted 81 people waiting for a bed at the hospital, the highest level of overcrowding noted at any Irish hospital. The same number was also recorded on dates in April, July and September.

The INMO, which counts patients waiting for admission nationally as part of its TrolleyWatch survey, blamed the overcrowding on understaffing and bed shortages.

The hospital has attributed previous spikes in patient numbers to an increase in overall attendances, especially by older and more frail patients.

Across the country, 610 admitted patients were waiting for beds on Tuesday; 424 in emergency departments and 186 in wards elsewhere in the hospitals.

Cork University Hospital had 58 patients waiting for admission, and the Mater hospital in Dublin had 40.

According to the INMO, September was the worst month so far this year for overcrowding, with 10,641 patients having gone without a bed. This is double the level recorded in the same month a decade ago.

“These are simply astonishing figures - especially outside of winter,” said INMO general secretary Phil Ní Sheaghdha. “It’s placing a massive strain on our members on the frontline and is seriously worsening patient care.

“We have now seen 80 consecutive days where the trolley figures are higher than 2018 - often by as much as 50 per cent. This is equivalent to the bed capacity of Beaumont Hospital 15 times over.

“This is beyond unsustainable. At the root of the problem is capacity. We need more hospital beds and more nurses and midwives to staff them. The HSE’s disastrous recruitment pause simply has to go.”