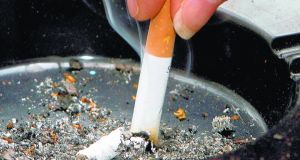 The risk of dying from cancer before the age of 75 was about one in 10 for women and one in eight for men. File photograph: Getty

Men are more likely to develop cancer than women and are 32 per cent more likely to die from it, according to the findings of a report analysing cancer trends over the past 25 years.

The annual report of the National Cancer Registry Ireland, which looks at cancer in Ireland from 1994-2017 and includes estimates of the years 2017-2019, said 12,769 men are diagnosed with an invasive cancer each year, compared to 11,118 women.

The risk of dying as a consequence of cancer before the age of 75 was about one in 10 for women and one in eight for men.

Irish Cancer Society head of services Donal Buggy suggested the cause of the disparity between men and women could be down to lifestyle choices and the propensity to attend screening services.

“Men’s health needs a renewed focus and funding by the State for cancer prevention programmes,” he said. “We need further research into what the barriers are for men when it comes to choosing healthy behaviours or accessing healthcare and screening.”

Those figures were up from 39 per cent in men and 46 per cent in women diagnosed during 1994-1999. Significant survival improvements are evident for most types of cancer.

Comparisons with six other high-income countries across three continents show Ireland has seen the greatest improvements in survival (comparing 2010-2014 with 1995-1999) of any of the seven countries for oesophageal and stomach cancers.

Reflecting population growth and survival gains, the number of people living with and beyond cancer continues to grow. There were an estimated 180,000 people living after a diagnosis of invasive cancer other than non-melanoma skin cancer at the end of 2017.

Although survival improvements are largely attributable to improvements in treatment over time, the report noted increases in early detection of some cancers, particularly through screening, have also contributed to improved outcomes.

It is estimated that about 35,440 invasive cancers were diagnosed annually during 2017-2019, or 23,890 cancers excluding non-melanoma skin cancer.

These figures represent an almost doubling of case numbers since the registry’s early years (1994-1996), with much of the increase a reflection of population growth and ageing.

Just over 9,000 deaths from cancer occur per year.

Trends and projections show that when population and ageing is accounted for, rates have generally stabilised or even declined in recent years. However, population growth and ageing could result in a doubling of cases by 2045.