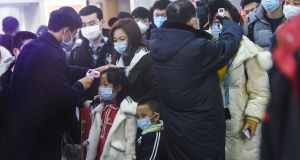 Officials check the body temperature of passengers after a train from Wuhan arrives at Hangzhou railway station in China’s Zhejiang province. Photograph: STR/AFP via Getty Images

The Health Service Executive (HSE) says it is ready to deal with the threat posed by a new flu-like virus in China.

Officials say the likelihood of cases occurring in Ireland remains low, but they are fully prepared to deal with any that do arise.

The assurances were given at a briefing by HSE staff on Thursday, where HSE director of public health Dr John Cuddihy said guidance has been issued to Irish airports and to healthcare staff to raise awareness of the threat posed by the new coronavirus and to identify at-risk patients.

The new coronavirus, known as nCoV-2019, first appeared in the Chinese city of Wuhan, but cases have been detected as far away as the US. It has killed 18 people, and infected more than 600.

Under the case definition being applied, anyone with a respiratory infection who has been in Wuhan over the past 14 days or was in close contact with someone who has the virus may be classified as a possible case.

Officials said anyone who felt they fulfilled these criteria should contact the health services by phone initially, rather than in person.

Separately, the World Health Organisation said on Thursday it was “a bit too early” to declare a global health emergency.

Director general Tedros Adhanom Ghebreyesus said the organisation’s emergency committee of 16 independent experts, which considered the status of the illness, had been divided in its conclusion.

“Make no mistake, though, this is an emergency in China,” he said. “But it has not yet become a global health emergency. It may yet become one.”

Dr Cuddihy described the risk of a case occurring in Ireland, even through secondary infection, as “low”.

The health service is ready for any cases should they arrive, according to HSE assistant national director Dr Kevin Kelleher.

Dr Kelleher said there has been a “massive change” in the way China had reacted to the latest virus compared to its response at the time of the Sars (severe acute respiratory syndrome) outbreak in 2002. Whereas before it was secretive this time around the authorities were “utterly open”, and the measures adopted were “phenomenally strong”.

The new virus does not appear to be as bad as Sars, he added, and all cases studied so far involve people with pre-existing disease.

Dr Cuddihy said the virus seemed to be capable only of limited human-to-human transmission. So far the death rate was 2 per cent, compared to 10 per cent for Sars and 30 per cent for Mers (Middle Eastern respiratory syndrome).

Under the protocols in place, patients suspected of having the virus will be brought to hospital in a “controlled delivery” by special incident response teams within the emergency services.

Where an airline passenger is showing symptoms of the disease, having been in an affected area, the pilot is required to notify ground staff so that the patient can be met by ambulance crew on arrival.

Dr Kelleher said this system applied in cases where airline passengers suffer other health events such as heart attacks. “It’s a well-honed system, but for now we’re not doing anything more than that.”

Officials said active screening of incoming passengers would only be introduced if the threat level increased.

The briefing was held to provide an update on this winter’s flu season, which is almost over.

This winter’s flu has been “peakier” than usual, with cases falling off rapidly last week from the high levels seen before Christmas, according to Dr Kelleher. The level of flu circulating in the community is expected to fall below the baseline level next week.

Flu still accounted for 351 hospital admissions last week, and a total of 3,083 this winter. There has been 103 admissions to intensive care and 52 deaths, most of them among people aged 65 and up.

Cases of norovirus and respiratory synctovirus are also significantly down, thereby easing the pressure on the health service.