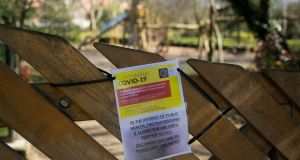 Dublin city was “under siege” by “microbial enemies”, Mr Brabazon said on Friday, adding that some people, particularly teenagers, were continuing to congregate against all health protection advice.

“During this difficult time for our city and country I would like to appeal to a minority of people, particularly teenagers, who seem to be missing the point about the dangers of the coronavirus,” he said.

Teenagers were putting their own grandparents’ lives at risk by continuing to engage in “face-to-face gatherings” during the Covid-19 outbreak, he said.

“You can still talk to your friends, but do it through social media and apps such as FaceTime etc. If you gather in large numbers you are putting people’s lives at risk, especially older people such as your parents, grandparents and elderly neighbours.”

He said he realised people were already tired of hearing the social distancing message, but it clearly needed to be repeated.

“As a city we are under siege by our microbial enemies but we can, and will, beat this disease. The question for us really is whether we’re all willing to play our part to help our city emerge from this crisis with as few casualties as possible,” he said. “Who amongst us would not want to be a hero and save one life?”

Speaking in the Seanad earlier on Friday, Sinn Féin Senator Máire Devine said she had witnessed a large group of teenage boys “terrorising” elderly people outside a pharmacy.

She said the youths were congregating outside the pharmacy in a large gang while older people were trying to maintain social distancing as they queued to go inside.

She said she asked the teenagers to move on but they started “playing tag” with the older people, grabbing them while shouting “Covid-19”.

Ms Devine said she “burst out crying” because the older people were so upset. It was like a scene from a “revenge horror movie”, she said. Gardaí came and dispersed the gang, she added.

Tánaiste Simon Coveney has also called on parents, families, peer groups and communities to confront people who were not taking the public health message seriously.

He was particularly concerned by “teenagers hanging out together in people’s homes or on street corners, interacting and socialising and chatting as they would normally do”.