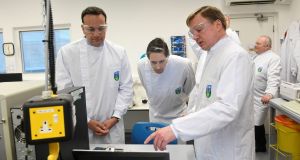 The coronavirus crisis has upended politics everywhere. You can almost smell the fear off Donald Trump from here, as the reality and extent of the calamity facing the threadbare US public healthcare system belatedly dawns on him, and his best route to re-election later this year – a thriving US economy – crashes before his eyes.

My guess is that trend will continue and within weeks, the situation in the US is going to look very, very bad indeed, and Trump appears utterly ill-equipped for the task of national leadership before him. We may be about to witness the complete collapse of his presidency.

All over Europe, governments that laboured for years to obey spartan fiscal restrictions are preparing to borrow like blazes and explode their deficits

British prime minister Boris Johnson’s cavalier bluster seems spectacularly ill-suited to a challenge that requires planning and preparation, frank and consistent communication, and – above all, perhaps – deference to experts. Johnson faces a situation where the pubs are full and the supermarket shelves are empty, rather than the other way around. And with Brexit talks in abeyance, the central mission of his premiership is in jeopardy.

Meanwhile, all over Europe, governments that laboured for years to obey the spartan fiscal restrictions of Brussels, Berlin and Frankfurt are preparing to borrow like blazes and explode their deficits as they struggle to protect their citizens from pestilence and penury. Standing behind all this is the thousand-pound gorilla of the European Central Bank, comprehending its chief responsibility is to the citizens of Europe, not to its own rules. Borrow what you need, the ECB told its members – even Italy, especially Italy – after an emergency meeting of its council on Wednesday night: we will stand behind you. Italian bond yields halved the following morning, making it cheaper for the country to borrow. Strange times indeed. Those who have argued the European Union is a neoliberal conspiracy of bankers and big business against ordinary people might have to adjust their critique as economies are wilfully crashed to protect the most vulnerable people in those societies.

At home, the crisis has given us the paradox of a government that cannot continue in office, but cannot be removed. Leo Varadkar’s administration has been definitively rejected by the electorate; the Dáil that approved it has been dispatched. The letter of our Constitution and the spirit of our democratic politics requires its replacement. Democratic legitimacy, a mandate from the people, the consent of parliament: assuming we all wish to keep living in a parliamentary democracy, these things matter. They cannot be suspended indefinitely.

I think Sinn Féin is correct that a national government would mean decision-making was harder, rather than easier

And yet the Government cannot be replaced. The notion a programme for government for the next five years can be thrown together between breaks in crisis meetings and briefings about how many people could die is no longer seriously entertained by the two parties who seem – conversations with both sides suggest to me – to be growing further apart this week, rather than coming together. There are all sorts of dark mutterings on either side.

Ordinarily, half the Dáil has no interest in the compromises and political cost of office; these days, it seems to be more than half. Sinn Féin initially ran a mile from the Greens’ suggestion of a national government though conscious that this is now a bad look, Mary Lou McDonald sought yesterday to row back a bit on that. If I’m sceptical about yesterday’s move, it’s because I think Sinn Féin is correct that a national government would mean decision-making was harder, rather than easier.

Having had his plans to form a government with Fine Gael and Fianna Fáil (and deliver the country’s most far-reaching climate action ever) scotched by his TDs, Eamon Ryan advises people to grow lettuce and paint their houses, reminding everyone of the Greens’ unserious tendencies – currently in the ascendant, it seems – in these most serious of times.

The speeches in the Dáil and Seanad on the emergency Bill, and the response to the Taoiseach’s well-judged address on Tuesday evening, evidenced a good deal of shared resolve and national determination to tackle the spread of the virus – an invaluable asset in applying voluntary measures. But warm feelings and community resolve alone – indispensable though they may be – won’t get us through this, or through the recovery and rebuilding phase that must follow. Hard decisions will also be needed. Hopefully medics will not have to decide who lives and dies, as they have in Italy. But they might.

Afterwards, there will be hard decisions about how the bills are paid. The current munificence of the ECB will not be open-ended, nor can it be. That will need a government, and it will have to be a strong government, able to enforce its will in the Oireachtas. I don’t think a minority government will cut it.

The paradox of the current government may be answered, like many political problems, by the passage of time. Within a week or 10 days or so, we will know whether we are following Singapore, which contained the rise in cases, or Italy, which didn’t. If we are Singapore, with a more benign outcome – and the present government is perceived to have handled the situation pretty well – then the demand for political change will be an awful lot less urgent than it has been quite recently. People might have had enough of change by then. A government of the two old enemies supported by Independents (if it can be put together, which is no certainty at all) might be more acceptable then than it was just after the election.

And if we are Italy – the dread scenario – it will surely be impossible to put together a new government along the lines that seemed inevitable only a week ago. In that case, the turbulence in our politics is only beginning. What might follow is entirely unpredictable.

1 Ireland could lose out as France lays claim to most of €5bn Brexit compensation fund
2 Ranelagh’s brand new street with three-beds from €1.325m
3 Miriam Lord: The Dáil's answer to John Wayne overcooks the ham slice, by slice, by slice
4 The Crown’s Josh O’Connor: ‘I’m a republican. I’m not interested in the royal family’
5 Boy (4) left in hospital for over two years due to Tusla and HSE failings, report says
Real news has value SUBSCRIBE