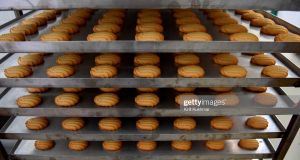 Taxing snacks such as cake and biscuits could be far more effective in cutting obesity rates than simply targeting sugary drinks, a new study suggests.

The research published in the British Medical Journal (BMJ) comes a year after the Government introduced a “sugar tax” on drinks in Ireland.

According to the study, a reduction in the consumption of high-sugar snacks has a better chance of affecting the health of the population – a finding unlikely to find favour with some in the food industry.

Researchers used an economic modelling approach to measure what effect a 20 per cent tax on snacks might have.

The results suggest that for all income groups combined, increasing the price of biscuits, cakes, chocolates and sweets by that amount would reduce annual average energy intake by about 8,900 calories, leading to an average weight loss of 1.3kg per person over one year.

By contrast, a similar increase applied to sugary drinks would result in an average weight loss of just 203 grams.

Ireland has one of the highest rates of obesity in Europe. Last year, one in four adults were classed as obese with one in four children already overweight. Men are more likely to have weight problems than women.

In 2016, a study published in the Lancet claimed Ireland and the UK were on their way to becoming the most obese European countries within a decade.

The latest study, conducted by five UK-based academic researchers, was based on food purchase data for 36,324 households.

The impact of a 20 per cent price increase would be largest in low-income households with the highest rates of obesity, it finds.

Qualifying their results, the researchers said some caution was needed; food tax and subsidy policies were complicated and difficult to predict. They also said product reformulation – changing ingredients in response to consumer demand – could also have unintended consequences.

Similar caution was expressed by Prof Francis Finucane, consultant endocrinologist at University Hospital Galway, who said that while promising in theory, the application of such a policy could prove problematic.

While any health-driven increase in tax was welcome on a hypothetical level “everybody has to realise there are other considerations . . . you are getting into more difficult-to-define food groups and they could potentially make it difficult to implement”.

Prof Finucane explained that while sugary drinks offered no nutritional value and were easy to target by policymakers, food products were less clear cut, particularly in cases where they had cultural importance, such as festive foods, or offered some nutritional content.

“At this stage I am not sure we are ready to broaden the net so widely,” he said.

Since Ireland introduced its sugar tax, revenues have not met expectations. Last year, the tax pulled in just €16.5 million against a projection of €30 million, with shortfalls also expected in 2019.

Prof Finucane said this could be indicative of the positive development that the tax may be driving a decline in consumption, an outcome that would be welcome in public health terms but difficult to measure.