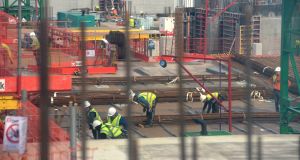 The national children’s hospital site at St James’s Hospital, Dublin: The restriction is likely to pose further challenges to a project that is already years late and massively over budget. Photograph: Dara Mac Dónaill

Dublin City Council has issued a one-week ban on out-of-hours construction work at the national children’s hospital after discovering permitted working hours had been breached without permission.

The council imposed the penalty after residents living by the site at St James’s Hospital complained about persistent unauthorised breaches of permitted working hours by the main construction contractor, Bam.

The restriction is likely to pose further challenges to a project that is already years late and massively over budget.

The Irish Times reported yesterday that construction is facing delays that could affect “critical timelines” for the €1.7 billion project. The warning came from HSE director general Paul Reid, who said mitigation measures were needed.

Bam worked about 96 hours in the final week of August, including normal hours and out-of-hours permits applied for and granted by the council. The residents complained that about 23 of these hours had been worked without the requisite permits.

On some days, construction began at 6am and continued almost until midnight. The pouring of concrete and other works continued on Saturday and Sunday.

“No permission existed for these [out-of hours] works,” DCC planning enforcement officer Neil Cameron said in a mail to residents last week. “On foot of this breach, derogations for permitted out of hours have been suspended for the week from the 9th-15th of September inclusive.”

Mr Cameron said derogations were considered on a case-by-case basis and related to “works that cannot be carried out during normal working hours”.

“The issue of notifications to area residents of scheduled works that are the subject of derogations has been taken up with the developer,” he added.

The National Paediatric Hospital Development Board told The Irish Times on Monday derogations for out-of-hours construction works on the project were “solely a matter between the main construction contractor and Dublin City Council”. Normal working hours on site, according to the planning permission, are 7am to 7pm, Monday to Friday, and 8am to 2pm on Saturday, a spokeswoman said.

The children’s hospital project is one of the largest constructions sites seen in Ireland, and is located in a confined urban setting close to hundreds of people’s homes. With up to 250 lorries a day coming in and out of the site, levels of dust and noise pollution, along with vibrations, are measured regularly.

Nine of 12 noise monitors recorded breaches of permitted levels over the summer, reports furnished to residents show. Noise levels at Mount Brown Road, for example, breached levels on 49 separate days; this was attributed to “ambient noise”. Another monitor, at Mountshannon Road, recorded 41 daily breaches, while at Cameron Square, permitted noise levels were breached on 32 days in the period June 24th to August 11th.

Measured vibrations were also above specified levels at several locations around the site on a handful of days over the summer. In each case, the breach was attributed to “accidental knocks”.

Dust levels were within permitted limits; the highest recording, at the hospital’s rear entrance, was 38 per cent of the maximum allowed.