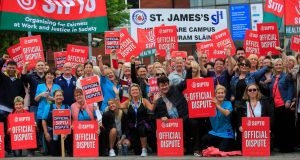 Siptu urged its members in health service support grades “to continue to prepare for strike action, possibly the week after next”. Photo: Gareth Chaney Collins

Further strikes by thousands of health service support staff may take place in the week after next, the trade union Siptu has warned.

Talks at the Labour Court aimed at resolving the pay dispute involving up to 10,000 health support staff working in hospitals throughout the State were adjourned late on Wednesday night.

Siptu health division organiser Paul Bell said the Labour Court would consider whether there would be further engagement.

He said the parties were no nearer to reaching a resolution to the dispute.

Mr Bell said there were no further meetings planned at this stage although the union would keep in touch with the Labour Court over the next two days.

He urged his members in health service support grades “ to continue to prepare for strike action, possibly the week after next”.

The Labour Court process, which began originally last Wednesday, was convened in the wake of a one-day strike by staff including healthcare assistants, laboratory aides, technicians and porters .

More than 2,000 patients had scheduled appointments, operations and procedures cancelled as a result of the stoppage.

The health service support staff had suspended plans for a further three days of work stoppages to allow for talks.

The Government, Siptu says, has failed to pay increases recommended by a job-evaluation scheme which examined whether any of the roles of the staff had changed and expanded in recent years.

The current job-evaluation scheme was agreed by the Government in a side deal with Siptu as part of the negotiations of the broader Lansdowne Road public service accord in 2015.

Siptu has argued its members should be due pay increases of up to €3,000 on foot of the job evaluation scheme and that the staff concerned should have received their rises months ago.

The Government in earlier talks at the Workplace Relations Commission offered to pay part of the increases in November with the balance in 2020 and 2021.