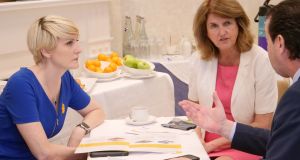 The Government must reduce the “huge financial strain” on cancer patients and their families in this year’s budget, the Irish Cancer Society has said.

Presenting the organisation’s Budget 2020 submission in Dublin on Wednesday, the society’s chief executive Averil Power said patients and families were “under siege” from the costs involved with treating the disease.

“Many families suffer a big drop in income when someone gets cancer,” she said. “At the same time, they have to pay for everything from chemotherapy appointments to anti-nausea medication and hospital parking charges.

“With extra costs of up to €1,200 a month, they find themselves under siege financially while also trying to manage the physical and psychological burden of having cancer.”

Marie Moran, a breast cancer survivor from Co Mayo, said inpatient charges while dealing with a cancer diagnosis during pregnancy were difficult to deal with.

“It was such a whirlwind,” she said. “I was diagnosed with breast cancer 32 weeks into my pregnancy. It was such a stressful time for me, physically and emotionally, and to be landed with bills of €80 for each treatment session was a real shock.

“When bills quickly turned into final notices demanding payments, it caused me so much stress and worry at an already difficult time.”

The Irish Cancer Society called on the Government to remove inpatient charges, which currently cost €80 per visit up to a maximum of €800 a year, and to reduce the Drugs Payment Scheme threshold from €124 a month to €100 for families and €72 for single people.

It also called for the removal of the prescription charge for medical card holders, and for a reduction in hospital parking charges for frequent visitors.

“In a survey recently carried out by Core Research, almost three in four people supported the removal of inpatient charges while six in 10 said the drug payment scheme threshold should be reduced,” said Ms Power.

“It also found those on medical cards often don’t take all their medication because they can’t afford prescription charges. More than half chose to pay for their child’s medication ahead of their own.

“Unable to afford essential medicines, such as anti-nausea tablets, patients’ suffer far worse side effects from their cancer treatment than they should. This is incredibly unfair and must be addressed.”

The organisation also called for “sufficient funding” to implement the Government’s commitments under the National Cancer Strategy.