State at risk of losing status as having eliminated measles 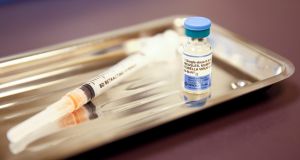 A vial of the MMR vaccine. The State is at risk of losing its status as having eliminated measles. File photograph: Lindsey Wasson/Reuters

The State is at risk of losing its status as having eliminated measles because of sustained low uptake of the MMR vaccine.

The World Health Organisation (WHO) said it was concerned that uptake of the MMR vaccine in Ireland was not high enough to prevent outbreaks and sustain elimination.

It was responding to a Department of Health report published yesterday which showed that uptake in parts of the Republic, such as the Wicklow area, was as low as 84 per cent.

The WHO claims that coverage of at least 95 per cent is needed to achieve elimination and prevent future transmission of the measles virus.

Elimination is the term used once a country has reduced the number of cases of a disease to a low enough level to stop it spreading through the population for at least three years.

Measles is a highly contagious disease which carries the risk of severe side-effects, including brain damage and even death. It can also lead to ear infections and permanent hearing loss. Symptoms include a fever, cough and red rash.

So far this year, there have been 48 cases of measles reported by Ireland to the WHO, compared with 78 for all of last year. The State achieved elimination status at the beginning of 2018, based on data from the previous year, when there were only 25 cases of measles.

Irish children are given two doses of the measles, mumps and rubella (MMR) vaccine – the first at 12 months and the second in their first year at school.

The National Healthcare Quality Report 2019 said that uptake for the first dose of MMR was 92 per cent nationally, but 89 per cent in Donegal and Dublin North, 87 per cent in Dublin West, and 84 per cent in Wicklow.

“In recent years, an anti-vaccine campaign has been covered in the media,” the report said. “Although the safety of vaccines has been established in a large number of peer-reviewed, academic studies, there are still population groups that are not reaching the vaccination rate required for community protection, or ‘herd immunity’.”

Dr Dragan Jankovic, technical officer at the WHO’s immunisation programme, said 95 per cent coverage of MMR was needed “every year in every community” to prevent the virus from spreading.

“Suboptimal coverage allows for an accumulation of susceptible people, which will lead to outbreaks as soon as the virus is imported from an outbreak elsewhere,” he said. “The WHO is concerned that routine coverage with two doses of measles-containing vaccine is not high enough to prevent outbreaks and sustain elimination in various countries, including Ireland.”

A WHO commission which verifies the status of eliminated diseases met last month to discuss the latest data and is due to determine whether the State’s status is maintained later this summer.

In a statement, the Department of Health said a forthcoming vaccine alliance of healthcare professionals, policymakers and patients will examine vaccine hesitancy.

“Vaccine hesitancy is not unique to Ireland. It is a global issue and has been identified by the World Health Organisation as one of the 10 leading threats to global health in 2019. The new alliance, which will be launched in September, will examine this and how best to address it.”

Andrew Jordan, a Dublin-based GP and former director of the National Association of General Practitioners, said he thought the social and economic reasons for not vaccinating were often overlooked. He said that while “anti-vaccine sentiment” was still very much present, many families used out-of-hours services in lieu of a regular GP, which created issues in this regard.

“We have numerous GPs who have closed off their lists to new patients, and this is especially true in more rural areas,” he said. “In my practice, we do not settle for anything less than 95 per cent uptake among our patients and this should be the standard in every doctor’s office.”