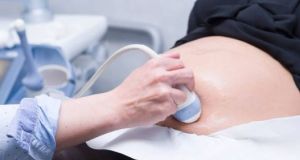 An international panel of experts in perinatal care had strongly endorsed continuing funding for Infant, which employs 100 people, but following a separate review process it was decided to end the funding. File photograph: Getty Images

A major research centre focused on women and children’s health could face an uncertain future following a decision to cut its funding, Dr Ruth Barrington, a former governance committee chairwoman of the centre, has warned.

Dr Barrington is one of two members of the governance committee of a research centre in UCC who resigned from their positions in protest at the manner in which Science Foundation Ireland (SFI) decided to cut funding for the facility.

The Irish Centre for Fetal and Neonatal Translational Research (Infant) is one of the SFI’s leading international research centres which opened in 2013, but its core funding will end in May 2019. Its brief was to improve health outcomes for mothers and babies during pregnancy, birth and early childhood.

An international panel of experts in perinatal care had strongly endorsed continuing funding for Infant which employs 100 people, but following a separate review process it was decided to end the funding.

Dr Barrington said while SFI said Infant could re-apply for funding in 2020, “it is not clear whether it will be able to survive in the interim”.

She said she was shocked after she got some details of how the decision was taken, which was “neither objective nor fair”.

In her view, an “arbitrary oversight panel” which took the final decision “do not seem to have followed their own rules”. The procedures were at odds with every tangible evidence-based metric, she believed.

“Having headed a research body for nine years [the Health Research Board], I could not stand over a process like this,” she told The Irish Times – she resigned in July.

Prof Douglas Kell of the University of Manchester confirmed he had resigned from the committee for similar reasons. A previous chief executive of the Biotechnology and Biological Sciences Research Council in the UK, he said the decision “did not meet the norms of fairness, transparency and accountability”.

Infant had been subject to a gruelling review by international experts, Dr Barrington said. It was involved in particularly difficult work with vulnerable mothers and children in a clinical setting –“unlike any other SFI centre”– but had met most of its targets over the past three years.

Its founding director Prof Louise Kenny tweeted on Monday: “And so Ireland once again ranks women and children last. Astonishing, shortsighted, at odds with peer review and all objective metrics.”

The centre “is world class and will continue to innovate for these vulnerable patient groups but this is a damaging and dreadful decision,” added Prof Kenny, who is pro vice chancellor and professor of obstetrics and gynaecology at the University of Liverpool – she maintains links with the centre as an adjunct professor.

Prof Kenny said the process was far from transparent. “Over the last five years since Infant was funded, consistently we have been ranked or rated as one of the best performing SFI research centres . . . the expert scientific review strongly and enthusiastically recommended refunding. So it came as a complete shock.”

On UCC’s decision not to appeal the decision, she said: “Frankly, I don’t understand that at all.”

Dr Barrington confirmed a strong majority on the governance committee wanted UCC to appeal the decision.

Cork TD Sean Sherlock (Labour) said Infant subscribed to a process of international peer review “and passed muster”. They were then defunded through another oversight process. “I have a question mark over that. Nobody seems to have sight of its work.”

It did not seem to stand up to scrutiny given Infant was deemed “excellent” by research peers and merely “good” by the SFI, as indicated by its director general Prof Mark Ferguson, he said.

“There is a disparity between the peer and SFI’s own process. The process is not transparent and scientists themselves are questioning it. It appears to be secretive. It appears the director general is part of that process,” he added.

As a former minister in charge of research, he felt obliged to outline his concerns, which he believed was a consequence of “weak political oversight” by Minister for Business, Enterprise and Innovation Heather Humphreys and Minister of State for Research and Development John Halligan.

Mr Sherlock added: “It’s deeply disappointing that the powers that be in UCC left their own women scientists swinging in the wind by not appealing this decision. Short-term political expediency on their part will damage UCC in the long run. It sends a signal that female-led research centres are dispensable.”

SFI said the decision followed a robust process. “The research proposals were approved for funding following a rigorous and extensive international peer review process of scientific excellence and strategic impact. There is no automatic renewal of funding following the completion of the six-year funding term,” it added.

The outcome of the four-year review process (which focuses on the first four years of the funded research) and proposal for future funding was presented to the SFI board, it confirmed. Six SFI research centres had their future research proposals approved for funding. Infant was “recommended to proceed to a separate competition to be reviewed against other potential centre applicants at a later stage. None were deemed unsuitable for further funding”.

All centres were given feedback from the international review process but “information pertaining to the four-year review and new research proposals is confidential given the strategic importance of the research and the high level of industry collaboration,” it added.

Prof Ferguson said SFI was “very transparent” in all of its dealings with Infant. “Sometimes that means making kind of tough decisions like this one where you say actually here are some things that need to be done and here’s an opportunity to compete again,” he told RTÉ’s Morning Ireland. “But I think it is really important to emphasise that Infant is a really good centre. It just needs to address some things.”

However, Prof Kenny claimed the centre was not given an adequate explanation of what those “things” were. “It came as a complete surprise because up until that point we had no real idea that we had been ranked so low.”

They had the independent expert scientific review of the panel composed of experts such as obstetricians and neonatologists and researchers in their area. “We scored very highly. We didn’t have any insight and I still don’t have any insight as to the make-up of the oversight panel that then adjusted those scores and ranked Infant as the lowest centre.”

UCC said Infant would continue its research funded by a diverse range of national and international funding agencies, industry partners and philanthropic donors.

The centre had grown rapidly from its initial [SFI]award of €6 million to over €30 million in five years comprising donations, competitive funding awards, and global partnerships with industry and academic researchers “which has enabled the development of Infant to the point where it now has over 100 staff; a dedicated paediatric clinical research unit, an internationally recognised biobank, a world-leading data hub and other clinical research infrastructure in obstetrics and neonatology”.