Setback for children’s hospital with exit of oversight expert 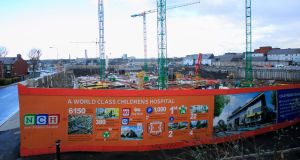 The national children’s hospital project has been plagued by controversy, particularly after The Irish Times revealed massive cost overruns a year ago. File photograph: Gareth Chaney/Collins.

The national children’s hospital project has suffered a fresh blow with the resignation of a leading corporate governance expert from the board set up to run it.

Prof Niamh Brennan, founder of the UCD centre for corporate governance, resigned from the board of Children’s Health Ireland (CHI) late last month, The Irish Times has learned.

When contacted, Prof Brennan declined to elaborate on the reasons for her resignation. It is understood she has raised concerns about the level of financial controls in place at the hospitals under the board’s remit in recent months.

The CHI board is overseeing the amalgamation of the existing three Dublin children’s hospitals and will be responsible for running the new hospital after it opens at St James’s Hospital.

In her letter of resignation to Minister for Health Simon Harris, Prof Brennan did not elaborate on reasons for her departure after less than two years.

She told Mr Harris it had been an honour and privilege to serve on the board and wished it every success.

The project has been plagued by controversy, particularly after massive cost overruns were revealed a year ago. The cost of the project has risen from an estimated €800 million in 2014, to €983 million in 2017, and €1.43 billion now. Equipping the building and providing IT pushes this bill up to €1.73 billion, but the finall bill is expected to rise further.

There is also mounting concern about running costs of the new hospital, in which all rooms are single occupancy. In 2017, these were estimated at €325 million a year, but by last December this estimate had risen to €366 million due to extra pay and staffing costs, and inflation.

CHI, which is working on updated costings, declined to say what the current estimate is until this process is complete.

When will hospital be finished?

However, it did say operational costs beyond the projected opening date in 2023 will be affected by pay and non-pay inflation and “normal service developments”.

A spokeswoman confirmed Prof Brennan informed the board at its last monthly meeting she had tendered her resignation to the Minister.

“The board expressed their gratitude and thanks to her for her very valuable contribution during her time on it,” a spokeswoman said. CHI was engaging with the Department of Health on the nomination of a successor for appointment by the Minister, she added.

The spokeswoman said construction of the new hospital is due to be completed by the end of 2022 and it would open in 2023 following a period of transition and commissioning.

The main building contractor, Bam, is behind schedule but the spokeswoman said the National Paediatric Hospital Development Board, a separate entity from CHI that is responsible for building the facility, believed where was “sufficient time left in the construction programme for the contractor to make up any time lost to date. There is currently no change to the programme schedule”.