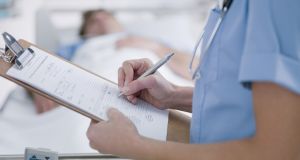 The Labour Court recommendation which ended the dispute in early 2019 provided for the establishment of a new enhanced grade with higher pay scales to which staff nurses could move under various criteria. Photograph: iStock

Nurses in more senior grades are pressing for higher pay to restore the difference between their salaries and those in lower level posts that existed prior to the agreement that resolved a strike last year.

The trade union Siptu has argued that the previous pay differential has been reduced by more than €1,500 .

The Labour Court recommendation which ended the dispute in early 2019 provided for the establishment of a new enhanced grade with higher pay scales to which staff nurses could move under various criteria. The deal also extended the payment of allowances to additional cohorts of nurses.

In a submission to a new expert review group on nursing established by the Government in the summer, Siptu maintained that “the inequity for promoted grades within the nursing and midwifery workforce are now further highlighted given the implementation of recent Labour Court recommendations, the introduction of the new roles and the expansion of access to allowances for some”.

“Siptu members within the promoted nursing grades have identified an erosion in the value of the differential when their salaries are compared with the new enhanced nurse/senior staff nurse grades.”

It said members were seeking a restoration of the value of the differential prior to the new scales from the Labour Court in 2019 which ended the strike.

“The value of the loss of differential at the top of the scale is on average €1,526.”

Siptu also maintained that the Labour Court agreement provided for an increase in the incremental value in pay between those staff nurses who were on the traditional scales and those who moved to the new enhanced grades.

Siptu also argued that there was no longer any valid reason for pay difference between nurses and midwives and those in health and social care professional grades “given the emergence of an academic qualification within nursing and midwifery and the expectation of postgraduate qualifications in career development”.