40 per cent of dementia could be prevented or delayed by targeting 12 factors, Lancet says 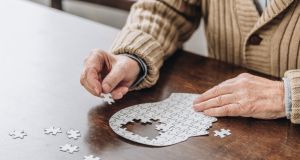 The Lancet Commission on prevention of dementia has set out new risk factors and including nine actions for policymakers and individuals after a review by its panel of international experts. Photograph: iStock

The Government needs to adopt new public health approaches to reduce prevalence of dementia in the Irish population in light of the findings of a major report published by the Lancet, according to the Alzheimer Society of Ireland (ASI).

The Lancet Commission on prevention of dementia has set out new risk factors and including nine actions for policymakers and individuals after a review by its panel of international experts. They have added excessive alcohol intake and head injury in mid-life, and exposure to air pollution in later life to the list of key modifiable risk factors for dementia.

“This report tells us that up to 40 per cent of dementia cases could be prevented or delayed by targeting 12 risk factors throughout life,” said ASI head of advocacy and public affairs Tina Leonard.

“This weight of evidence is also very relevant in an Irish context, and it is also noteworthy that alcohol intake is now recognised as a risk factor,” she added. This was especially important as the prevalence rate of dementia in Ireland had increased recently.

“Previously, it was estimated that 55,000 people have dementia, but this has now increased to 64,000 people and, of course, many people never receive a diagnosis of dementia,” she added. “This figure is predicted to increase to 150,000 by 2045. Age is the biggest risk factor for dementia, so as we are living longer the number of people developing dementia is increasing.”

Ireland needed to be more ambitious about preventing dementia and to implement policies to help prevent the disease, Ms Leonard believed.

If many of the risk factors were addressed through public policy initiatives, there would be far fewer people living with dementia in Ireland today and into the future, she predicted.

“Once again we are calling for the concept of ‘brain health’ to be used to inform government policies geared at minimising early school leaving and promoting a healthy lifestyle which, is it believed, could prove significant in reducing dementia risk.”

Other risk factors previously highlighted by the commission include less education in early life; hearing loss in mid-life, and smoking in later life.

She also highlighted ASI’s concern that dementia had not been included specifically in data collection related to Covid-19 mortality or public messaging. “We are alarmed at the lack of emphasis placed on the complex needs of those living with dementia, whether in the community or in residential settings. Dementia needs to be taken seriously in all public health messaging both combined with messaging about other illness areas, such as healthy heart and also in its own right.”

Dementia prevention must be integrated into national public health programmes alongside other major non communicable diseases in a national effort to fight growing prevalence of the condition, she said. “The Government should take heed of this new research and must show their commitment to promoting a better understanding of dementia including modifiable risk factors which features in the National Dementia Strategy.”

The need for investment in dementia services was critical, the ASI representative said, given that currently no county in Ireland had a minimum standard of dementia supports and services in place.

“Our recent research report, ‘Caring and Coping with Dementia During Covid-19’ which is available on alzheimer.iestrongly indicates the need for planning and investment in dementia services to meet an increase in service demand due to the impact of Covid-19 on people with dementia and family carers,” Ms Leonard said.