Mitigation steps being developed to respond to work falling behind schedule, says HSE 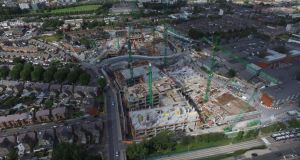 Children’s Hospital construction: The HSE said this weekend that work on some parts of the project was behind schedule. It said a revised programme timeline for the hospital was being developed which would set out mitigation measures.

Construction of the national children’s hospital is facing delays which could affect “critical timelines” for the project, the head of the Health Service Executive has warned.

The HSE said this weekend that work on some parts of the project was behind schedule. It said a revised programme timeline for the hospital was being developed which would set out mitigation measures.

In an internal report to members of the HSE board, its chief executive, Paul Reid, said the “capital project for the new children’s hospital is facing delays to the construction programme which could impact critical timelines if mitigation measures are not taken”.

Mr Reid said the main contractor working on the development of the new hospital at the St James’s Hospital campus in Dublin was to put forward a revised programme of work. Mr Reid said the hospital was currently due to open in April 2023.

The development of the new hospital has been the source of major political controversy over soaring costs. The Cabinet was told last December by Minister for Health Simon Harris that the overall bill for the new facility was estimated at more than €1.7 billion – an increase of €450 million since the Government originally backed the project in April 2017. However the Opposition has argued that the final cost could exceed €2 billion.

The National Paediatric Hospital Development Board did not comment on the potential delays this weekend.

However, the HSE said in a statement: “The main construction contractor is currently reporting to be behind on certain elements of the construction. However, a revised programme timeline is currently being developed which will set out mitigation measures.”

The HSE did not provide details on the background to the current delays in construction.

The HSE said it was the most complex construction project under way in the State. It said that throughout the lifetime of the project, “different aspects may be ahead or behind projected timelines and such issues are constantly being worked through the design team”.

The HSE said substantial progress had been made in the construction of the new hospital as well as in relation to its associated enabling works.