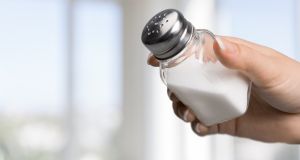 An upsurge in salt intake may be linked to thousands of extra cases of heart disease, stroke and stomach cancer, a new study has found.

Excess salt consumption has been linked to the development of hypertension or raised blood pressure. This is the dominant risk factor for cardiovascular disease, which includes heart disease and stroke, and is the most common cause of death in Ireland.

The peer-reviewed study published in the Journal of Epidemiology & Community Health in the UK is the first of its kind and comes after the Public Health Responsibility Deal, a voluntary pact made in 2011 by the British government with the food industry to reduce the salt content of food.

The study calculates this will widen health inequalities by affecting those who live with the greatest deprivation most. It also projects that by 2025, over £1 billion will be spent on the costs of treatment and lost productivity.

Sarah Noone, registered dietician with the Irish Heart Foundation, considered the study’s relevance in an Irish context. “A small amount of salt is essential for health,” she said. “But as a population ultimately we are consuming a lot more than we should be.”

While the recommended daily intake of salt for adults is 6 grams, the Irish population consumes a daily average closer to 9 or 10 grams.

“The vast majority is consumed before we hit the salt cellar at the table,” Ms Noone said. “The largest proportion already comes in the food that we’re eating – processed ready meals, fast foods, restaurant foods – anywhere up to 70 percent,” she added.

“It’s hidden in lots of places that you wouldn’t necessarily think contain salt,” she added. Some of the worst offenders include processed meats, bread products, ready-made soups, sauces like ketchup, cakes and biscuits.

To reduce salt intake, Noone recommended “looking at nutrition labels, comparing in terms of salt content, and choosing the lower salt options.”

The dietician emphasised that in reducing the risk of disease “no single food or nutrient is solely responsible. Salt is one aspect of our dietary pattern that’s important to look at, but we need to look at the overall picture.”

The food industry has a key role to play in reducing salt intake, with the majority of salt in the Irish diet already added to processed food before it reaches the consumer.

Karl McDonald, an enforcement policy manager with the Food Safety Authority of Ireland, said there are no regulations in Ireland regarding the salt content of food. “Other European countries have brought in some small pieces of legislation to regulate salt in certain products,” he said. “But we haven’t done that in Ireland, and there’s no Europe-wide regulation in relation to salt reduction.”

The Food Safety Authority has run a salt reduction programme since 2003. “Its original objective was to raise awareness about salt and its role in health with the food industry. From that point on we focused on working with the manufacturers in Ireland in relation to how they use salt in their foods, what they use it for, and if that salt content could be reduced,” he said.