Music may be better than drugs at calming patients, research finds 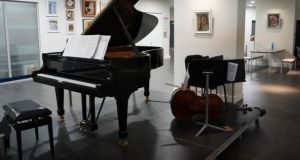 Music-based therapy may be a suitable alternative to anti-anxiety benzodiazepines administered to patients before an operation, new research has found. File Photograph: Linda Ibbotson

Music-based therapy may be a suitable alternative to anti-anxiety benzodiazepines administered to patients before an operation, new research has found.

Results of a clinical trial published in the British Medical Journal (BMJ) showed listening to music had similar effects to that of a sedative offered to calm the nerves before the use of regional anaesthesia.

The trial, carried out in the University of Pennsylvania, had 157 participants randomly assigned to receive either 1-2mg of midazolam, a type of benzodiazepine, or to listen to Marconi Union’s Weightless series of music. The track is considered to be one of the most relaxing in the world.

Both groups showed similar reductions in pre-operative anxiety among participants.

Anxiety is common among patients due to undergo an operation, and can affect postoperative recovery due to increased levels of stress hormones in the body.

It is usually treated with benzodiazepines, which have side effects such as disruption of breathing, disturbance of blood flow, sluggishness, and increased levels of agitation and hostility. They have also been linked to a higher risk of falls in older patients. Use of benzodiazepines also requires continuous monitoring by a clinician.

Earlier this month, The Irish Times reported that Irish people over 65 are the highest consumers of benzodiazepine medicine in the OECD.

However, researchers caution that more research will be necessary before the widespread implementation of music therapy for preoperative anxiety.

“Further studies are warranted to evaluate whether or not the type of music, as well as how it is delivered, offers advantages over midazolam that outweigh the increase in communication barriers.” they said.

There are currently 88 music therapists in Ireland, who work in a variety of contexts, including educational settings, care for dementia patients, palliative care, neo-natal settings, oncology, burn treatment, acquired brain injury and stroke. Dr Hilary Moss, the Course Director for the MA in Music Therapy in the University of Limerick, said that music therapy is usually employed alongside other treatments, rather than replacing them.

The therapy works by “engaging in enjoyable activity to change our perception of pain,” she said. “It’s not a cure, but it helps – many patients show significant improvement”.

In Ireland, music therapists are not currently State-registered medical professionals. But, Dr Moss says there is “as much evidence for music therapy as there is for speech therapy.”

1 Trump refuses to commit to peaceful transfer of power after election
2 Swedish expert backtracks on herd immunity for Ireland
3 Miriam Lord: Micheál has Mary Lou pegged as a street angel and House devil
4 'The next 10 days are critical' - NPHET warns young people are ending up in ICU
5 Shelbourne Hotel statues to be restored to their plinths
Real news has value SUBSCRIBE