‘No evidence’ to support doubters of cervical cancer preventer 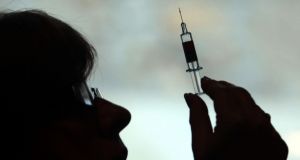 Vaccines designed to prevent infection with human papillomavirus (HPV) are effective in protecting against pre-cancerous cervical lesions in women, particularly in those vaccinated between age 15 and 26, according to a large international evidence review.

The research, by the Cochrane Review scientific network, confirms HPV vaccination is very effective in reducing cases of cervical cancer.

Head of the HSE’s national immunisation office Dr Brenda Corcoran said the research was very positive and supported their verdict on the safety of the vaccine. “An independent view is always welcome,” she added.

Campaign groups – including some in Ireland – had expressed concern about HPV vaccines, but this review “found no evidence to support claims of increased risk of harm”, said Dr Jo Morrison, a UK consultant in gynaecological oncology.

The review also found no increase in the risk of serious side effects with rates of about 7 per cent reported by both HPV-vaccinated and control groups not administered the vaccine. In addition, the group looked at the incidence of side effects, following vaccination. They found, as expected, a number of people had local reactions but there were no serious side effects.

HPV is one of the common sexually-transmitted diseases. Most infections do not cause symptoms and go away on their own, but when the immune system does not clear the virus, persistent HPV infection can cause abnormal cervical cells. These pre-cancerous lesions can progress to cervical cancer if left untreated. HPV is a leading cause of cancer deaths among women worldwide, according to the World Health Organization.

In Ireland, some 300 women a year are diagnosed with cervical cancer, which results in around 90 deaths. A total of 6,500 women get a “pre-cancerous” diagnosis requiring hospital treatment.

Experts not directly involved in the review said its findings were robust and important.

“This intensive and rigorous Cochrane analysis . . . provides reassuring and solid evidence of the safety of these vaccines in young women,” said Margaret Stanley, a specialist in pathology at Cambridge University.

Prof Keith Neal of the University of Nottingham said that HPV also caused many other serious cancers, especially head and neck. “In time, as more people have been vaccinated, we will see a reduction in all HPV cancers,” he added.

The review only looked at cervical pre-cancer (in women and girls) and does not make any comments about whether boys should be given the vaccine. The current argument from UK health authorities is that “herd immunity” will protect boys as well.

“But this is not completely true because 10 per cent of girls do not get vaccinated, nor does it cover sexual activity when abroad or with arrivals to the UK after the vaccination age. Gay men will never be covered by herd immunity from females . . . Boys can only be fully protected if all their sexual partners have been vaccinated fully,” Prof Neal added.

A Royal College of Physicians of Ireland expert group has recommended boys be vaccinated. Its opinion is being evaluated by the Health Information and Quality Authority, while the Department of Health is expected to indicate its decision on introducing it, or not, by the end of this year.

British Society for Immunology president Prof Peter Openshaw said the review finds that, so far, the vaccine causes no serious side effects. “This is very important to emphasise – the negative press that the vaccine has received in some countries is completely unfounded on evidence.”

The Irish uptake rate for the vaccine fell to about 50 per cent a few years ago amid widespread fears, discussed particularly on anti-vaccination social-media sites, that it had damaging side effects. After an HSE campaign to counter this, uptake has increased to more than 60 per cent. Ireland is one of the few countries in the world to successfully reverse falling HPV vaccination rates. In 2017, uptake rates increased by 12 percentage points. – Additional reporting: Reuters