‘The pint man is back’: Belfast pub resumes delivery service after legal challenge 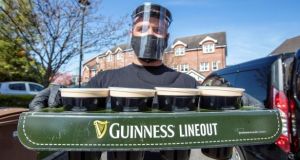 A Belfast pub has been given the go-ahead to resume its pint delivery service after the police said they were satisfied it was not in breach of licensing laws.

“Pints are unpaused,” Hatfield House Bar in south Belfast posted on its Facebook page on Friday. “The pint man is back and ready to deliver freshly poured pints of Guinness directly to your door.”

The manager of Hatfield House in south Belfast, Ritchie Keenan, told The Irish Times he was “relieved” and the decision would save jobs. Their customers, he said, were “very happy. The phones are ringing off the hook.”

Hatfield House began its pint delivery service in April. Pints were ordered and paid for in advance, and then poured at the customer’s door from a van fitted with Guinness taps. The drinks were then left on the doorstep, to avoid contact between staff and customers.

The pub suspended the service after the Police Service of Northern Ireland (PSNI) said it did not comply with licensing laws.

The bar took a legal challenge against the PSNI, and an interim hearing was listed for the Royal Courts of Justice in Belfast on Friday.

However progress had been made between the parties, and David Scoffield QC, for Hatfield House, told the court that he was “happy to say that that has culminated in a letter which was sent on behalf of the respondent over lunchtime which sets out some of the detail of some of the matters that have been discussed and invites my client to confirm a number of issues, most of which have been confirmed already in discussions, which we anticipate there won’t be any difficulty with.

“Once that confirmation has been received, we’re told that the PSNI will have no objection to a draft beer delivery service being commenced.”

Another hearing will take place next Friday to review progress and potential final disposal.

In a statement issued by the PSNI on Friday, Chief Supt Jonathan Roberts said the PSNI was now satisfied that “with the development and implementation of changes in the service and appropriate undertakings in respect of insurance and health and safety legislation and bespoke terms and conditions of sale, this service could comply with the applicable legislation.

“While PSNI and our licensing officers across Northern Ireland are happy to work with any licensees considering introducing a similar service, we would advise them to ensure that any such proposed service meets all current legislative requirements and they have the correct licence in place,” he said.

Earlier this month the so-called “Guinness Express” operated by by O’Flaherty’s Pub in Buncrana, Co Donegal, was forced by gardaí to temporarily halt deliveries amid a “lack of clarity” over licensing laws.

Pubs in the State can now operate delivery services, subject to certain restrictions, after Garda Headquarters sought legal advice on pubs delivering drinks and selling takeaway beverages from their premises.